There are many people in Denmark who support Dansk Folkeparti, the Danish People’s Party. But not many of them are practicing Muslims.

Here’s the story of one such Muslim, a native of Egypt who is now a Danish citizen. This is from an article in yesterday’s Avisen, which was kindly translated into English by Zonka. Make sure you read Mr. El-Ayouty’s “Manifesto for a Present Day Muslim”:

Cherif is a Muslim and votes DPP

63-year-old Cherif El-Ayouty is a believing Muslim who has voted DPP since the party was created. Now he is in the process of writing a manifesto for present day Muslims. 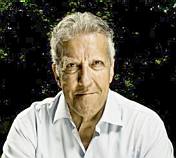 Cherif El-Ayouty is one of the few Muslims in Denmark who votes for Danish People’s Party (DPP). According to him the party is the only one that defends his values.

“The Army can defend my country against attacks from the outside. The police can defend my property. However, it is only the Danes themselves who can defend their values. That is what DPP is doing,” says Cherif El-Ayouty.

63-year-old Cherif El-Ayouty came to Denmark from Egypt to work as a civil engineer in 1968. Since then he became a Danish citizen and thus has the right to vote, and he gave his first vote to the Progress Party [the predecessor of DPP — translator]. He has voted for DPP since the party was created in 1995.

“Other parties say that they represent the same values, such as human rights and equality between men and women. But the other parties do not defend Denmark against those who attack those values. To me DPP is like a political army.”

Cherif El-Ayouty came to Denmark long before the much debated 24-year rule and countless tightenings of the immigration policies. Yet he supports the tightenings, which according to him lets the right immigrants in and keeps the wrong ones out.

“I still believe that I would have been let into Denmark today. And I’m certain that those scientists and artists, who can make a contribution to Denmark, can still get in. Several hundred doctors from the Middle East and other countries are being hired. I don’t believe that DPP is against importing skilled people. But if Denmark had imposed the tightenings 20 years earlier, we would have avoided getting the wrong immigrants,” he says and refers to the comprehensive family reunion for immigrants, who weren’t self-sufficient.

The West is Best

Cherif El-Ayouty does not believe that DPP is anti-Muslim, as Kristian Thuelsen Dahl has said and later retracted. He believes that DPP just is against those Muslims whose beliefs conflict with Danish values.

Cherif El-Ayouty is an observant Muslim. He prays and complies with Ramadan; however, he doesn’t pay much attention to halal. He currently works on a book with the working title “A Textbook for Present Day Muslims.” In the voluminous manuscript of printed A4-papers in a plastic charteque he describes the principles for a modern Islam without head-scarves and sharia law, but with equality between the sexes and human rights.

“If the Islamic world does not evolve and follow the rest of the world, they will be lost. Like the Neanderthal people.”

Off with the Scarves

In his view the message of Islam has been misunderstood by many Muslims. They are now dragging the Islamic world further and further behind. He would like to have the Muslims of the world to create a better society in the Middle East and encourages the Muslim countries to follow the West, by separating church and state and aiming for scientific development.

“Everything that mankind has achieved, such as buildings, progress, technology and science, has happened in the West. The best life you can have is in the West.”

Cherif El-Ayouty looks like a man, who has done well in business life. He has never interrupted his work to pray. Contracts for millions have made it possible for him to live in an 250sqm apartment with a view of Langelinie at an estimated price of 9-10 million kroner. His flatscreen is either 52 or 60 inches, he can’t remember. He is 191cm tall and athletic. To him it is important to blend into the Danish society unlike the Muslims, who according to him ‘bother’ their neighbors by wearing head scarves and not shaking hands with people of the opposite gender.

“The scarf has nothing to do with Islam. It is a symbol of suppression of women, and it is an abomination to humanity itself. Those women who wear the scarf accept being suppressed and being worth less than men. It is nonsense, when they say that they have chosen to wear it themselves. If they don’t wear it the men won’t marry them,” says Cherif El-Ayouty.

Furthermore he believes that the suppression of women in the Muslim world portrays the man as the weak gender, since he has a need to make women worth less.

“The men are so weak that they believe they cannot handle an equal woman. They believe that she by force has to be worth less than them. By social force, by religious force, by the state’s force. It is weak men. But a man has to be strong and have a woman as an equal partner.”

Faith Is A Private Matter

He has never prayed in a Danish mosque. Because many Danish Muslims, according to him, are practicing their religion ostentatiously to compete about who is the better Muslim.

The Prophet Can Be Drawn

Cherif El-Ayouty also believes that the Muslims of the world are themselves to blame for the Islam-skepticism that started in the West after the terror attacks on September 11, 2001. It is hard for him to be offended over the Mohammed Cartoons. The cartoonists only drew their impression of Islam.

“When Islam has a poor image in the West, the Muslims must also accept being criticized. It is their own fault, that Islam has a poor reputation. It is not something the Christians have invented,” says Cherif El-Ayouty.

He loves the prophet Mohammed, just like many other Muslims, but he doesn’t get offended about the cartoons.

“The Prophet is above such things. Neither do I get offended if a dog barks at me on the street, or if somebody says I’m a “stupid pig”. I just don’t understand why the Muslims in the Middle East aren’t offended why they are living in such misery. You live suppressed, like a lowly animal in one’s own country. Wouldn’t you be offended over that?” he asks rhetorically.

A Present Day Muslim ought to: