The best jokes I have ever heard originated in the Soviet Union. I recently encountered a couple I hadn’t heard before, and I offer them here.

It’s a cold day in the middle of winter in Moscow, and a long line has formed in front of a butcher’s shop on the rumor that sausages will soon be available.

After the eager citizens have stood in line for an hour, slapping themselves and stamping their feet to keep warm, the butcher sticks his head out the door and says, “Comrades, I regret to say that the lorry has been delayed, and there will not be enough sausages for everyone! All Jewish citizens are required to leave the queue!”

Muttering and grumbling, the Jewish people leave the line.

The temperature drops and the wind starts blowing. After a couple more hours the butcher sticks his head out again and says, “The lorry has been further delayed, and there will be a distinct shortage of sausages! Comrades from the Moldavian S.S.R. are required to leave the line!”

So the Moldavians leave, and the remaining citizens continue their vigil as the wind blows harder and snow starts to fall.

A while later the butcher reappears and says, “The lorry is still not here! Comrades from the Estonian S.S.R., please leave the queue!”

And so it continues the rest of the afternoon: one by one, the various ethnic groups of the Soviet Socialist Republics — the Ukrainians, the Lithuanians, the Latvians, the Byelorussians, the Kazakhs, the Uzbeks, the Tajiks, the Turkmen, the Kyrgyz, the Armenians, and the Georgians — are all required to leave the line and go home. No one is left but the comrades of the Russian Federated Socialist Republic.

Finally, as night falls, with the snow almost a foot deep, the butcher emerges one more time.
– – – – – – – – –
“Comrades! Counter-revolutionaries have sabotaged the fuel depot! The lorry cannot refuel, so there will be no sausages today! Everyone must go home!”

Muttering and grumbling, the Russians turn away and start the long walk home through the snow. One old fellow turns to the man next to him and says, “Those damned Jews! Why do they always get all the breaks?” 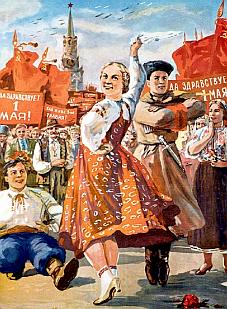 An old Jewish man is riding on the Trans-Siberian railway on his way to Vladivostok, carrying a huge and heavy suitcase. He enters the first carriage, walks down the center aisle, and taps a fellow passenger on the shoulder.

“No, of course not!” replies the passenger. “I am actually quite fond of Jews!”

The old man thanks him, proceeds down the aisle, and taps the next man on the shoulder.

“Absolutely not! Some of my best friends are Jews!”

The old Jew thanks him and continues on his quest. All through that carriage, and the next one, and the one after that, he receives similar responses. Finally, at the end of the train, he reaches the last passenger.

“I most certainly am!” the fellow replies. “Filthy kikes! I hate those f***ers!”

“At last, an honest man!” exclaims the old Jew. “Would you mind watching my suitcase while I go to the toilet?”

15 thoughts on “A Couple of Soviet Jokes”