Our Swedish correspondent Carpenter sends along the following essay on the cognitive dissonance that is currently plaguing the cultural elites in Sweden.

Here’s a report on the aftermath of the Discrimination Ombudsman’s lawsuit, on which you blogged some days ago in a post entitled “The Dhimmi News from Sweden”. I think this lawsuit case turned out to be more than just “dhimmi news”…

Which political correctness do you choose?
by Carpenter

Sweden has a #2 ideology (with Multiculturalism as #1), namely feminism. Feminism in Sweden is a mostly chronic and pathological hatred aimed at ethnically Swedish men who, if we were to believe some of the nutcases, ritually slaughter infants (yes, that actually has been claimed!) Representatives of this ideology are over-represented in the media as a trend-setting voice of the public debate. 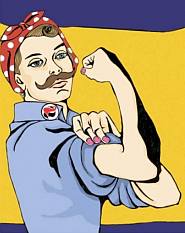 There are also feminists who aim their criticism at Muslim patriarchal culture, even if they don’t get the same attention and space in media. We Swedish men are used to being charged for our suggested patriarchal elements, and I at least wonder: Are our attitudes towards women even comparable to the Muslim attitudes?

That being said, I appreciate feminist criticism of Islam’s patriarchal elements. It gives us Swedish men a break from the usual dung of charges against us. But more importantly, for once it puts a focus on a medieval attitude towards women found among Muslims, and away from pseudo-problems.

When this happens, a dilemma emerges for PC people; namely which side to take. If a Muslim had demanded five prayer breaks a day in a job interview and thus did not get employed, the entire establishment would take the Muslim’s side. Everything is in order when a Swedish employer denies a Muslim employment; it becomes very simple who is evil and offensive, and who is good and offended.
– – – – – – – – –
But a woman, another victim of the vast White Male Conspiracy, feeling offended by a Muslim, and vice versa? ERROR! Being politically correct isn’t that easy after all!

It was in yesterday’s Expressen that Maria Hagberg, chairwoman of Nätverket mot hedersrelaterat våld — [the] Network against honor-related violence — took the offensive against the Discrimination Ombudsman of Sweden for her arbitrary attempt to sue. The preamble follows:

DO supports religious oppression of women

A young Muslim man lost both his unemployment coverage and practical training since he didn’t want to shake a female interviewer’s hand for religious reasons. “A serious misjudgement” says DO Katri Linna, who recently submitted an application for a summons against Arbetsförmedlingen [Sweden’s state employment office]. There will be over 160,000 kronor [roughly $27,000] in compensation for the man if DO gets to decide. Maria Hagberg, chairwoman of Nätverket mot hedersrelaterat våld, writes that DO is running the errands of the patriarchy. The religious man should have been reported to DO for discrimination against women, writes Hagberg. [emphasis added]

If a Muslim man doesn’t shake hand with women he doesn’t know out of respect, it’s of course not a sign of Muslims wanting to take over the world and institute sharia laws. It is common politeness in many parts of the world. Thus writes Leif Abd al-Haqq Kielan, in the light of the criticism of DO who runs a lawsuit for a Muslim man who has been denied a job and unemployment coverage. The assimilation method has crash-landed long ago. Therefore, DO does the right thing taking the side of tolerance [emphasis added]

Women fighting for equality and against patriarchal oppression on the one hand. Muslims fighting for tolerance and understanding of other cultures on the other.

Equality or tolerance. Xenophobia or patriarchy. Feminism or Multiculturalism.

This dilemma has been implicit for decades. But now, we Swedes have officially been offered two kinds of political correctness.

11 thoughts on “Which Political Correctness Do You Choose?”