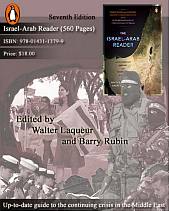 Now available from Penguin publishers is this new edition of one of the most highly respected, widely used reference books on the Middle East, documenting the Arab-Israel conflict and peace process from its inception to the present day.

The book provides almost 300 primary texts covering more than a century of history:

Materials are presented reflecting the positions of Arab leaders and states, Europeans, Israel, Palestinians, the USSR, and the United States. The texts of international resolutions and agreements, as well as accords made during the peace process, are also provided.

The result is a comprehensive work suitable for reading, reference, and teaching.

For detailed information on this book, follow this link: Gloria Publication Catalogue

The 60th anniversary of Israel’s statehood will soon be here. In anticipation of that event, Professor Rubin has collaborated with Walter Laqueur in putting together the seventh edition of the Israel Arab reader. Though you may be familiar with much of the material, this original source compendium has it all in one place.

I will have more to say about it next week.