Sweden in the 21st century seems to outsiders to be a huge insane asylum. The Swedes that I know — both personally and via email — are well aware of the official lunacy that reigns in their country.

Our Swedish correspondent LN emailed us this morning with a couple of items from the New Multicultural Sweden. First, the latest from Law Enforcement: 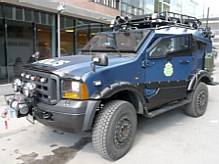 This is the new Swedish police car.

Are they perhaps expecting something?

And then he talked about Sweden’s extensive efforts to combat “discrimination”:

This is the logo of DO, Ombudsmannen mot etnisk diskriminering, the Ombudsman against ethnic discrimination (or perhaps the Dhimmification Ombudsman).

The left hand is holding a sphere, and the same left hand is pressing away an identical sphere. Use it as a projective test of your frontal lobes!

I suppose the message is that the two spheres are not treated equally. A genius must have been at work. Skaal!

DO has got an office of almost sixty administrators and lawyers. The latest case resulted in a municipal office having to pay damages of SEK 160,000 ($27,175) to a Bosnian Muslim who did not behave in a normal Swedish way by saying hello and shaking hands with a woman, and thus did not get the job. He was “religiously discriminated against”.

In Rome you do not do as the Romans do any longer.

I did a little research on the Discrimination Ombudsman, and found the website for Ombudsmannen mot etnisk diskriminering. There is an English language version of the instructional page on how to file a complaint about discrimination. When you open the drop-down list to choose your language, this is what you see:
– – – – – – – – –

The list includes North Kurdish and South Kurdish, but not Swedish.

In other words, it’s impossible to discriminate against a “person of Swedish background”.

The page offers the following enticement to a discriminated-against person of non-Swedish background:

If the answer is yes, then you could have been the victim of ethnic or religious discrimination. There are laws that prohibit discrimination in different areas of society.

What DO can do for you

If you have been the victim of ethnic or religious discrimination you can file a complaint with the Ombudsman against ethnic discrimination (DO). You can call our advice line, phone: 08-508 887 00. You can receive legal support free at this number. You do not need to tell us your name when you call for advice.

DO can even represent you in Court. Send your complaint by e-mail or regular post to DO. You can obtain the form for filing a complaint by downloading it from our website or by calling and ordering it.

DO is a government agency with nearly 50 employees. The ombudsman is Katri Linna, who has been appointed by the Swedish government. DO works to prevent and stop all forms of ethnic and religious discrimination in society.

This is how to contact DO
The Ombudsman against ethnic discrimination (DO)
Visiting address: Drottninggatan 89
Postal address: Box 3045
103 64 Stockholm

If I were a person of Swedish background residing in the nation formerly known as Sverige, I know what I’d do.

I’d deluge the offices of the Ombudsman against ethnic discrimination with phone calls, faxes, emails, and postal letters. Every day I’d write a message in Turkish, Somali, or Yiddish (since Swedish isn’t permitted). In it I’d detail the horrendous discrimination that I, as a helpless person of Swedish background, experience at the hands of Swedish officialdom.

Every day. Repeat as often as necessary. Keep those cards and letters coming, folks!

I’d make those fifty-odd employees of DO earn their generous salaries. I’d keep them hopping. They’d be so busy filing memos — and writing me back to tell me that my case had no merit — that they wouldn’t have time for coffee or falafel breaks.

That’s what I’d do if I were Swedish.

39 thoughts on “The Dhimmi News from Sweden”