A reader sent us an email this morning about an Islamic charter school in Minnesota:

A violent incident that yesterday at the Tarik ibn Ziyad Academy in Fridley, Minnesota, where Muslim school officials physically assaulted a local camera crew that was at a public school that is supported with public funds, while that crew reported on matters of a very public nature and interest.

The reporters who were physically assaulted were from KSTP Channel 5 in Minneapolis. Their report and video can be found here.

The original issue about the Academy — which shares premises with a mosque — is that Friday prayers were being conducted under official school auspices, and that schoolbuses to take children home weren’t available until after post-school religious instruction was finished. This latter practice, for all practical purposes, made instruction in Islam mandatory in a public school financed by the taxpayers of Minnesota.

Here’s what KSTP has to say about the incident: 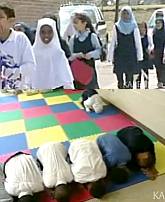 In an attempt to report about the new findings from the Department of Education Monday, 5 EYEWITNESS NEWS went to Tarik ibn Zayad Academy in Inver Grove Heights.

While on school grounds, our crew was attacked by school officials. Our photographer was injured while wrestling with the two men over the camera.

Our photographer was examined by paramedics and suffered minor shoulder and back injuries.

The state education department on Monday directed the charter school to “correct” two areas related to religion at the school on Monday.

Tarik ibn Zayad Academy, which focuses on Middle Eastern culture and shares a mosque with the Muslim American Society of Minnesota, came under fire after a teacher alleged that the school was offering religious instruction in Islam to its students.

“The Minnesota Department of Education goes to great lengths to make clear to charter schools and their sponsors that, while schools should appropriately accommodate students’ religious beliefs, they must be ‘nonsectarian’ under the state’s charter school law,” said the state’s education Deputy Commissioner Chas Anderson.

The allegations first surfaced after an article by a columnist for the Star Tribune. The Education Department subsequently began a review of the south metro school and released its findings Monday.

The agency said it was concerned about the school, with about 300 students, accommodating communal prayer and providing transportation to an after-school religious program.

“We have directed the school to take appropriate corrective actions regarding these matters and will continue to provide oversight to ensure that the school is in compliance with state and federal law,” Anderson said.

Make sure you watch the video so that you can see for yourself the thuggish intimidation practiced by school employees. The guy who reaches his hand out to grab the camera is the same one who spoke so reasonably in other video interviews.

The school maintains that the TV crew was trespassing. I’m not certain that walking on the sidewalk in front of a public school can properly be termed “trespassing”, but — trespassing or not — what was done to the cameraman constitutes assault in my book.

Our emailer said that another news crew that was also there from another station filmed the physical assault. I couldn’t find the video in question, but KARE Channel 11 (also from Minneapolis) has some interesting video of the school.

As a final note, according to our correspondent:

The school is named after the Jihadist warrior who conquered Christian Spain in 711 A.D. His famous speech to his troops, known throughout the Muslim world, promised glorious death in Jihad, revenge, women as war booty, and placed at its center the installment of “the one true religion” by its conquest of the Infidels in Christian Spain. See the translation of the famous speech here.