Ahead of the elections for the National Assembly in Kuwait, it was hoped that things might turn out differently. 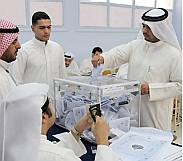 For one thing, the new, larger district system replaced the old fragmented arrangement, which had led to voting abuses. Instead of tribal politics and vote-buying in twenty five small wards which tended to be heavily influenced by familial ties, the new system has five large districts with ten representatives each.

Under this reform, each voter could select four of the fifty-five or so candidates in each district. Then the ten top vote-getters would gain parliamentary seats.

As Washington Institute for Near East Policy said a few days before the election:

Kuwait’s new electoral system intends to promote more coherent and cooperative legislative activity, but electoral reforms often have unintended consequences or no consequences at all.

I think that for the moment we can say that the results ended in “no consequences”, since the hardliners stayed in power.

The vote was meant to resolve a two-year political standoff between parliamentarians and the country’s cabinet ministers. However, after hard-line Islamists and tribal leaders scored major victories in Saturday’s parliamentary poll, many say the bickering will only continue, keeping this oil-rich nation from catching up to its booming Gulf neighbors.

The speedy economic development in Dubai and Qatar, the newly glitzy emirates where democracy doesn’t get in the way of business, loomed large in the election here. Many Kuwaitis blame both the government and the parliament for the lack of progress even though the country had $32.7 billion surplus for the 2007-08 fiscal year.

“Kuwaitis are very disappointed at being left behind in terms of advancement [compared] to their [Gulf] neighbors, especially since Kuwait led the region up until the ‘80s,” says Suliman al-Atiqi, a management student at the American University of Kuwait.

“Kuwait has now definitely acknowledged the competition … and seems very eager for a comeback. A comeback however will only be under way should the government privatize further government-controlled fields and find a way to make business easier to conduct from a bureaucratic level,” he says.

Prior to the last election in 2006, there was a great deal of active enthusiasm by younger voters. However, the results of that experience have left them cynical about change via parliament:

More than half of Kuwait’s population is under the age of 25. During the run-up to the 2006 parliamentary polls, Kuwait’s young people engaged enthusiastically in the campaigns – backing candidates, writing blogs, and attending opposition protests. This time around, however, voters said that they felt more cynicism than optimism about the outcome of the elections and a new parliament.

“In order for faster economic reforms to take place the notion of waiting for the parliament to take place is a joke,” opines a young Kuwaiti, Osama al-Sadi.

It turns out that the younger generation was right, since the elections are nothing but the same old, same old…

Kuwait voted according to the tradition: the count of the votes, which was completed today, showed a strong presence of radical Islamic MPs.

In fact, it may be somewhat worse than before:

The appeals of Prime Minister Nasser Al Ahmad al Sabah, who even during the election day reiterated his hope that the women who would enter the National Assembly would contribute to the growth of the country, were to no avail.

This ungainly group of Assembly members is not likely to last long. The emir has the right to dissolve the body and call for new elections. It won’t happen immediately, but it’s obvious that many, especially the young voters, are not happy with the results. Moreover, it is unlikely that this group will work effectively with the Emir’s cabinet, which will result in dissolving the Assembly yet again.

Establishing a democratically elected body of representatives who can work together with other branches of government seems to have a long, slow learning curve.

2 thoughts on “High Hopes are Dashed in Kuwait’s Elections”