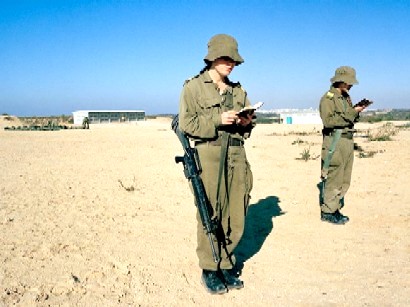 Universal conscription for Israeli citizens is a fact of life there. Which is not to say that military service is easy. However, in a country beset on all sides, each able-bodied citizen must take part in its defense.

Rachel Papo served her time in the Israeli Army. An American citizen who was raised in Israel, she later returned to the US to pursue her education in photography.

As part of her master’s thesis, she went back to Israel fifteen years later to photograph the young women currently on active duty:

Walking onto an army base after all these years was very disorienting, as memories began to surface, and blend with feelings of estrangement. The girls who I encountered during these visits were disconnected from the outside world, completely absorbed in their paradoxical reality. They spoke a language now foreign to me, using phrases like “Armored Cavalry Regiment” and “Defense Artillery.” Would it have made any difference to explain to them that in a few years the only thing they might remember is their serial number? Photographing these soldiers, I saw my reflection; I was on the other side of a pane of glass-observing a world that I had once been a part of, yet I could not go back in time or change anything. It felt like a dream.

Anthropologists would call what she did a kind of participant observation. But it was more than that, and more than simply a bittersweet sentimental journey. Ms. Papo captured a slice of life that not many young women encounter. Her book is not only aesthetically appealing, it is of historical value.

The photographs from her travels to Army bases is now available as a book, Serial No. 3817131 (Ms.Papo’s serial number. I don’t suppose anyone who has served in the military ever forgets that identity).

The pictures are sometimes haunting, sometimes surreal, often touching. These are images of vibrant young women and they make a stunning contrast to the usual cheesecake photos of girls their age. At the same time, many of these girls are just as pretty, just as desirable as any artificially arranged images of erotica. In fact, for men who are comfortable qua men these women are probably more appealing.

After the fold, I’ve listed the links to thumbnails of her photographs, her website, and the page where her book is advertised. Be sure to see the images there, also.
– – – – – – – – –
Thumbnails are here.

The home page for Ms. Papo’s Israeli photos is here. The image on that page is one of the pictures I consider surreal.

It is also the cover photo on the book, available here.

This link will bring you to the publisher’s page of flowing images from the book. It is a powerful, dream-like display, almost like holding the book in your hand.

Ms Papo says of her book, her “project”:

The photographs in this project serve as a bridge between past and present-a combination of my own recollections and the experiences of the girls who I observed. Each image embodies traces of things that I recognize, illuminating fragments of my history, striking emotional chords that resonate within me. In some way, each is a self-portrait, depicting a young woman caught in transient moments of introspection and uncertainty, trying to make sense of a challenging daily routine. In striving to maintain her gentleness and femininity, the soldier seems to be questioning her own identity, embracing the fact that two years of her youth will be spent in a wistful compromise.

Youth itself is transient and uncertain. Youth trained to war and facing the prospect of boredom or death is lived on another plane entirely.