Below is a report from our Flemish correspondent VH about various news items related to Geert Wilders and his movie Fitna.

Salah Edin (who tastefully pictured himself as a twin of the Moroccan terrorist Bouyeri, the murderer of Van Gogh) is a Moroccan living in/from the Netherlands and is known for his anti-kaffir anti-Dutch raps. A very good reason for Wilders to choose the picture of this idiot instead. Two in one go. 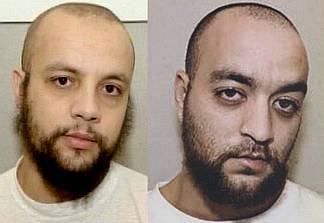 He is named after Saladin, the Kurdish muslim warrior who conquered Jerusalem from the Crusaders, but he became a mocro-rapper. So much for his mindful parents. This Edin caused a stir by appearing in a video clip in which he can be seen as the father of a mocro-family that lives off food-vouchers. He grows a beard, starts walking around in Guantanamo-orange tracksuits, and later with a bomb belt, when he’s arrested by the police. This clip is popular amongst Moroccans in the Netherlands and subsidized by … hold your breath … the Balkenende Government! Wilders didn’t pick this fellow to star in his film for nothing!

Edin’s rap/clip, “The Land of Ever” (which title he stole from another singer in the Netherlands) was produced by a company (CCCP — what’s in a name?) and subsidized by the TAX-clip-fund from the Ministry of Education, Culture, and Science and the Ministry of Economic Affairs.

The NMO, the Muslim Broadcasting Organization (funded by… the Balkenende Government), which recently kicked out its “moderates”, is close to becoming a Brotherhood mouthpiece, and therefore also starred in Fitna. They picked up the Westergaard-copyright claim as an excellent tool to hit back at the kaffir, and now demand that their part be removed within 24 hours.

Underneath this video (on Closer), there is a video of Edin’s pal Appa, the Moroccan rapper who once stated, “If I ever meet Wilders, he’s mine… if someone were to put a bullet in his head, I wouldn’t mind”.

Neither Balkenende, nor the socialists, nor the Queen opposed this threat. Wilders’ feelings as well as the ordinary Dutch citizens’ feelings are seemingly irrelevant to them.
– – – – – – – – –
They also don’t care about the extremely high crime rate amongst Moroccan youth (12-18 years old) that is five times higher than average, and which Edin’s subsidized video won’t help bring that down even one percentage point.

But Edin is in good company: the Dutch extreme left and the leftist “artists” scene protests when a foreign country censors its writers, but supports the censorship of Dutch politicians, and if it is deemed “necessary” even bombs *, burns, or kills them. 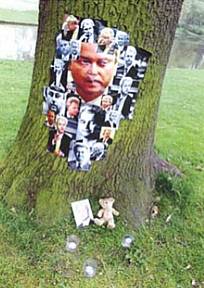 One such liberal, Jonas Staal, had to appear in court last year for creating Wilders “memorial” sites that could be understood as a death threat. In sixteen locations in Rotterdam he arranged pictures of Wilders accompanied by teddy bears, candles, flowers… the works. The artist even sent out invitations for the court case, as a part of his “art-piece”. The judge didn’t consider it a threat, though, and the case was dismissed.

The Dutch are soaked in leftist propaganda; there is almost no center or center-right MSM anymore. No wonder it will take a while to help them open their eyes. Those who did manage to open them saw Fortuyn being killed and turned their back on politics again, disillusioned. That is why Wilders’ film is brilliant: as Fjordman also comments, it is not aimed at those that already know all, but those who feel something is wrong and have to be mobilized to help make a change.

And a change is needed soon.

One of the former terrorist-members of RaRa, Wijnand Duyvendak, is now a member of the Dutch Parliament for the Green Left Party (Groen Links). The same party whose former leader Paul Rosenmöller was a dedicated Pol Pot supporter (and never apologized for it) and is now a respected acquaintance of Princess Maxima, the wife of Crown Prince Willem Alexander.

8 thoughts on “The Dutch Saladin”