This is one of the stranger stories I’ve come across recently. It’s notable that the BBC reports it with a straight face. If there’s irony here, I can’t detect it:

Muslim scientists and clerics have called for the adoption of Mecca time to replace GMT, arguing that the Saudi city is the true centre of the Earth. 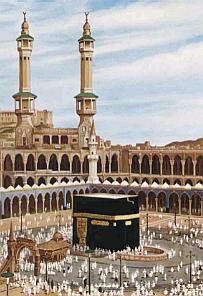 Mecca is the direction all Muslims face when they perform their daily prayers.

The call was issued at a conference held in the Gulf state of Qatar under the title: Mecca, the Centre of the Earth, Theory and Practice.

One geologist argued that unlike other longitudes, Mecca’s was in perfect alignment to magnetic north.

He said the English had imposed GMT on the rest of the world by force when Britain was a big colonial power, and it was about time that changed.

A prominent cleric, Sheikh Youssef al-Qaradawy, said modern science had at last provided evidence that Mecca was the true centre of the Earth; proof, he said, of the greatness of the Muslim “qibla” — the Arabic word for the direction Muslims turn to when they pray.

I’d be interested to see some of the scientific “evidence” that proves Mecca is the center of the Earth. Presumably the academic journals haven’t covered it, since they are all tainted by the unbelief of the kuffar. But surely something has been published somewhere…?

The meeting also reviewed what has been described as a Mecca watch, the brainchild of a French Muslim.

The watch is said to rotate anti-clockwise and is supposed to help Muslims determine the direction of Mecca from any point on Earth.

So what’s the primary purpose of the watch? To tell time, or point to Mecca?

Or maybe there’s a way to perform both functions simultaneously?

The meeting in Qatar is part of a popular trend in some Muslim societies of seeking to find Koranic precedents for modern science.

It is called “Ijaz al-Koran”, which roughly translates as the “miraculous nature of the holy text”.

The underlying belief is that scientific truths were also revealed in the Muslim holy book, and it is the work of scholars to unearth and publicise the textual evidence.

This is an interesting idea. If the underlying ideas of all scientific discoveries are to be found in the Koran, then why is it that all major scientific breakthroughs and inventions can be credited to various infidels who never even looked at the Koran?

Perhaps it’s an extraordinary coincidence. Or maybe Copernicus, Galileo, Newton, Darwin, and Einstein were guided by secret messages beamed directly to their brains from the Koran without their even being aware of it.

But the movement is not without its critics, who say that the notion that modern science was revealed in the Koran confuses spiritual truth, which is constant, and empirical truth, which depends on the state of science at any given point in time.

That sounds like dangerous heresy to me. Time to find out who said it, and then issue a fatwa.

21 thoughts on “Set Your Watch by Mecca”