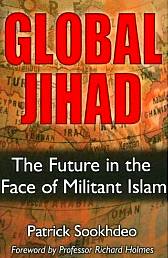 At the Counterjihad conference in Brussels last October, one of the featured speakers was Dr. Patrick Sookhdeo.

Dr. Sookhdeo had just published a book, Global Jihad: The Future in the Face of Militant Islam, and I bought a signed copy from him while I was there.

I skimmed the book later while I was traveling, but have only now buckled down to reading it in detail. It’s a thoroughly researched and scholarly book with copious citations, and rewards close examination.

…[T]he war on Islamic terrorism is just one aspect of a “long war” which has lasted 1400 years already. This is the history of Islamic expansion and pursuit of political dominance which are best expressed in the Islamic doctrine, institution and practice of jihad. Based on the models of Muhammad and the early Islamic state, jihad has determined the relations of Muslims to non-Muslims ever since, including the theory, ideology, rules and practicalities of waging war. The foreign policy of the Muslim state is linked to jihad which is the basis of the relationship between Muslims and non-Muslims.

While modern Muslim apologetics tries to reinterpret jihad in purely defensive modes (in a moral sense as against evil in society and in a spiritual sense as the individual’s fight against temptation and personal sin), there is no doubt that in Islamic history jihad has normally been viewed, both in traditional Islamic law (shari’a) and in Islamic practice, as the armed conflict against non-Muslims (and against heretical or apostate Muslims) permanently waged to ensure the victory of God’s chosen community and religion, the umma (the whole body of Muslims worldwide), over all polytheistic powers, peoples and lands.

Only under severe constraints, when non-Islamic power was overwhelming, could the jihad imperative be suppressed for a while, as under colonial rule. This concession derived from shari’a principles of darura (necessity) and maslaha (public good) which permit the breaking of shari’a principles when Muslims are weak and Islam is in danger. Such suspension of jihad however, is always temporary and jihad can be reactivated at any time if Muslim strength is deemed capable of changing the balance of power and reasserting Islamic dominance.

The book has hundreds of citations and additional material in the endnotes, and, being an inveterate reader of footnotes and endnotes, I’m going through those as well. One of the notes on the above passage is a quote from Hizb ut-Tahrir literature (note 9, p. 543):

In fact the Islamic ideology did not only define the foreign policy, but it also demonstrated the method by which this foreign policy was to be practically executed and therefore carried to the whole world. This demonstration is in the guidance of the Messenger and it is al-Jihad… (Zahid-lvan Salam, Jihad and the Foreign Policy of the Khilafah State, (Khilafah Publications, 2001), pp. 42-43, http://www.challenging-islam.org/library/jihadpolicy.pdf, viewed 17 November 2006)

Dr. Sookhdeo’s dedicated research demonstrates that violent jihad is not an aberration, but is firmly grounded in the Koran, the Hadith, and the Sunna, and has been a mainstay of classical Islam for more than a millennium. As time permits I will scan other passages from the book and post the excerpts here.

As of this writing, Amazon says Global Jihad is “out of stock”. The book is also being sold at the Church Society bookstore, but I’m not sure if that site can process transactions outside of the UK.

There may be other places where the book is available online. I recommend that readers track down a copy; it is well worth the purchase price.