Keep the Muhammad al-Dura hoax in mind when you watch this BBC news video about yesterday’s incident in the Gaza strip in which a Palestinian video cameraman was killed, allegedly by “indiscriminate” Israeli shelling.

I’m no video expert, and the BBC segment is brief, tiny, and very jiggly, so I’ll leave it to analysts more experienced with video forensics to dig out the technical details from this news clip.

Richard Landes at Augean Stables has experience with Pallywood and its staged news. Here are his questions about the BBC video sequence:

These are good points. You see a kid lying on the ground next to his bike, with a splodge of blood on his side and his shoes some distance away, like Calvin after a surprise attack from Hobbes. Is that how a victim of overhead shelling would appear? And what about the lack of any other evident damage nearby from the shell?

This whole thing smells fishy to me, but then I’m paranoid after years of fauxtography and Pallywood “news” footage.

I noticed another discrepancy in this video, and I welcome feedback from technically-minded people who know more about videography than I do.
– – – – – – – – –
For more than twenty years I was a landscape painter, and spent a lot of time outdoors in the variable light and weather plying my trade. One of the trickier aspects of the job was to get the “time of the painting” exactly right, to fix the moment of the day represented by the light in the painted image so that it was consistent throughout the depicted landscape. Learning to do this made me acutely sensitive to the length and direction of shadows.

The subliminal skills honed by all those years of painting kept niggling me as I watched this video over and over again, until I eventually became conscious of what was bothering me.

The first minute or so of the video consists of a brief segment allegedly shot by the dead cameraman, followed by three segments shot subsequently along the road where the bike-riding kids and the burning truck appear. The first and third of these segments are part of the same general video sequence, but the second one — about fifteen seconds, from 00:42 to 00:57 — is from different footage. It shows the mourning spectators milling about next to the roadside fence. 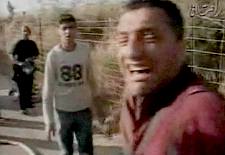 It’s difficult to be certain, because the camera angle is from the opposite direction, and the sequence is very brief and jiggly. However, the shadows look distinctly longer in this shot, and the cast of light is more orange, as if it were a half an hour or so closer to sunset. In the other sequences, the shadows of the brush on the other side of the road do not cross the road entirely, but in the middle segment they appear to intersect the opposite bank a short distance beyond the spectators.

I’ll go out on a limb here and offer a very amateur opinion: the middle segment was shot a half an hour to forty-five minutes later than the “dead” children and the burning truck.

Even if none of this video was staged, even if all the events actually occurred as described, this report has all the earmarks of a classic Pallywood production. The events are drawn entirely from Palestinian accounts, presented from the Palestinian point of view, and transmit uncritically all the conclusions and value judgments of the Palestinian stringers who supply the material.

In contrast, anything that would reflect badly on the Palestinians is invariably preceded by the phrase “Israel says”. Palestinian accounts are reported as fact, while Israeli versions are alleged, and obviously meant to be questioned. This is typical of MSM reporting on Gaza and the West Bank, particularly by the BBC.

Staged or not, this report is a disgrace.

14 thoughts on “Pallywood Agitprop from Al-Beeb”