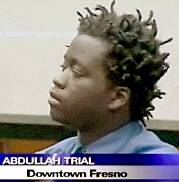 Ramadan Abdur-Rauf Abdullah, a member of Jamaat ul-Fuqra, is on trial this week in California for the 2001 murder of a sheriff’s deputy. A local news report gives an account of recent testimony heard by jurors, including a tape of Abdullah’s questioning by detectives not long after the murder.

Al-Fuqra Exposed is a website dedicated to monitoring and reporting on the activities of Jamaat ul-Fuqra and the Muslims of America. Yesterday’s post discussed the trial of Ramadan Abdullah:

Finally facing justice for his crime, Ramadan Abdur-Rauf Abdullah, now 26, went on trial this week in Fresno County, California for killing Deputy Sheriff Erik Telen in 2001. He is pleading insanity in his defense.

Abdullah is originally from Binghamton, NY and was a member of the Muslims of the Americas (MOA). Spread throughout the country, the MOA, made up of primarily African-Americans, are a cult-like offshoot sect of Sufi Muslims who follow Sheikh Mubarak Ali Gilani of Pakistan. The organization serves as a religious front for a radical militant group known as Jamaat ul-Fuqra, a secretive network also headed by Gilani. For all practical purposes, the groups are one and the same, though members’ knowledge of and/or involvement in illicit activity varies.

A former member of JuF talked to Al-Fuqra Exposed about Abdullah, specifically addressing the question of the defendant’s sanity:

No matter what, he still had enough of JF teachings in him so at some point he was sane. As a younger teenager he used to teach the younger boys…the basic training all members have. I do know he had excellent rifle training because I would hear his name in reference to that matter.

In fact, the prosecutor said in court of Abdullah’s accuracy, “This was a very well-aimed and well-timed shot that was fatal to Deputy Erik Telen hitting him directly in the head.” Telen died instantly.

The prosecutor is reminding us of something that state and national law enforcement agencies know all too well: Jamaat ul-Fuqra stockpiles firearms, and trains its members in their use, in dozens of isolated rural compounds scattered across the United States, Canada, Mexico, and the Caribbean. The group has a well-documented history of violence, fraud, and other criminality.

Go over to Al-Fuqra Exposed for more detailed coverage of the trial of Ramadan Abdullah, including extensive quotes from the former member of JuF.

As I mentioned last weekend, the same group, the Muslims of America, has organized a parade this Saturday in downtown Binghamton, New York, to celebrate Mohammed’s birthday. They’re coming over from their nearby national headquarters to engage in some multicultural festivities.

When you read the press reports about the upcoming parade, there’s no investigative effort by the media to report on MOA’s background. If it were a fundamentalist Christian group organizing the event, dozens of reporters and photographers would be wearing out shoe leather to dig up as much damaging material as possible.

But MOA gets a pass: the copy goes straight from the Islamberg press release into the papers without any further examination: “Muslims of the Americas was formed in the 1980s when several families migrated from ghetto properties in New York City to Hancock to make a new start on their own property in a clean, rural environment…”

Time to put it all behind us and — to coin a phrase — move on.

Saturday’s parade — which will involve the closure of several streets and the assistance of police — had to be approved by Binghamton’s mayor, Matt Ryan. If you look at the website for the mayor’s office, you’ll see that the Executive Assistant to the Mayor is named Tarik Abdelazim.
– – – – – – – – –
And who’s responsible is issuing permits for public events in the city of Binghamton? Here’s what it says at City Hall’s FAQ page:

How do I go about arranging a public event at City Hall or in the Community?

So Tarik Abdelazim, also known as “the deputy mayor”, is the go-to guy if you want to organize a parade in Binghamton.

Mr. Abdelazim has an unusual name, so I did a little forensic googling to see what I could discover about him. It turns out that he has quite a footprint on the web, much of it from before he entered the mayor’s service.

Up until at least 2005 he was an active journalist and community organizer. He kept a blog and ran a website called Modoc Press, part of “the global archipelago of dissent”. He was an editor for the New York University interdisciplinary journal Anamesa and participated in something known as the narcosphere.

His politics seem to have been — to put it mildly — progressive. In fact, for a time he held the position of “Binghamton’s Progressive Advocate”. He appeared in the Radicalendar and many Indymedia newsletters and event listings. He helped organize antiwar marches back in 2002 and 2003, and took part in a local initiative to impeach President Bush.

He was especially active on behalf of the St. Patrick’s Four:

On Monday, March 17, St. Patrick’s Day [2003], four of us from the Ithaca Catholic Worker Community — Peter De Mott, who served in both the Marines and the Army including a year in Vietnam as a Marine, Clare and Teresa Grady and Daniel Burns — went to the Army-Marine Recruiting Center in an act of nonviolent civil resistance to war making. We read the following statement and poured blood around the entrance to the center, including on the flag, to call attention to the horror of war.

The protesters were arrested for their disruption of activities at the recruiting center, prosecuted in federal court, and eventually convicted. And Tarik Abdelazim was with them all the way, reporting on their case and pleading for their cause.

The most telling quote from Mr. Abdelazim’s writings can be found in this letter to the editor of The New York Times Magazine:

The Terrorist As Auteur

In the context of filmed beheadings, [Michael] Ignatieff concludes that we still have the choice to decline our enemy’s invitation deeper into the darkening vortex of anything goes. More likely — and sadly — we are already there. Whether by firebombing in aerial raids or mutilation by knives, the death of innocent civilians should disgust us equally. Consider this: Is it the filmed act itself that constitutes a more repugnant form of barbarism, or is it that such war imagery dared to puncture our mission of liberation? What’s more, if we could compress all those killings we cleanly record as “collateral damage” into a single picture of carnage, I would bet Ignatieff would have a hard time determining which image reached deeper into his moral void.

So here we have a prominent unelected official in the Binghamton city government who says, in effect, that the beheading of hostages to make terrorist videos is morally and esthetically equivalent to the war against Muslim terrorists.

Is it any wonder, then, that Mr. Tarik Abdelazim is also the person responsible for inviting the members of Jamaat ul-Fuqra to parade through the downtown streets of his fair city?

Note: MOA variously calls itself “the Muslims of America” and “Muslims of the Americas”, so the difference in titles in this article is not a typo.

For more information about Jamaat ul-Fuqra, see the links on our left sidebar, or visit The Politics of CP.