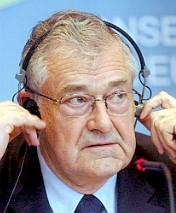 Once upon a time Terry Davis was a Labour Party apparatchik in Birmingham, but these days he’s the General Secretary of the Council of Europe. For most of his career he concentrated on parochial affairs in his Hodge Hill constituency, but now he gets to hobnob with the movers and shakers in Strasbourg and apply his mind to the larger issues.

Such as — just to pick a random example — the necessity for a little judicious reduction in European freedom of speech.

Yesterday Mr. Davis wrote a letter that was published in the Danish daily newspaper Jyllands-Posten. Interestingly enough, the letter was written in Danish, and neither TB (our tireless Danish correspondent) nor I could find an English-language version. Perhaps Mr. Davis availed himself of the translation facilities at the Council of Europe headquarters in Strasbourg…?

In any case, Jyllands-Posten, in the admirable Danish tradition to which we have become accustomed, responded to Mr. Davis’ letter by publishing a lead editorial on the same day. TB has translated both items.

We should be cautious
by Terry Davis, General Secretary of the Council of Europe

The very controversial drawings of Mohammed, depicting the prophet Mohammed, were recently reprinted in several Scandinavian countries. This happened after the arrest of three individuals who had allegedly planned to murder one of the artists.

Indignation toward yet another case of extremist violence is completely legitimate, but we should be cautious about unconsidered reactions to these sorts of events. I would like to state three points.

First: One cannot make compromises on violence. What followed the first publication of the drawings in Denmark was completely unjustified and unacceptable. The reported attempt to murder one of the artists should not only be condemned but also it should be taken to court.

Secondly: Freedom of speech is important in order for our democracies and our societies to work properly as a unit. This is secured by the European Convention of Human Rights.

Of course I don’t think that the drawings should have been forbidden, but it is important to remember that unlike torture or the right to live, freedom of speech can be reduced under certain circumstances, which fact is mentioned in the convention it self.

The European Convention of Human Rights has previously insisted on such reductions in connection with a piece of art that was regarded as an insult to a faith community. Maybe it is appropriate here to mention that the religion we are talking about was not Islam. It was Christianity.

Thirdly: The drawings that were published were insulting not only to the violent minority of Muslim extremists, but also to the majority of Muslims who don’t promote violence.

This is the reason why I do not agree with the way that the Scandinavian media have reacted to this matter, with this latest escalation of the story. We all agree that violence must be condemned.

We all agree on the necessity to respect and defend freedom of speech. But I cannot see how the publication of these drawings — which have once again insulted the whole Muslim population worldwide — has had any positive effect on either of these points.

Without making any analogy to the controversy about the drawings [Then why is he bringing it in? — translator] I would like to comment on the announced release of an apparently very provocative movie about Islam, produced by the Dutch politician Geert Wilders.

It is not clear at this point whether this is a real movie or a just a cock-and-bull story. It seems like a cynical and irresponsible attempt to wreak havoc — due to political motives — which potentially could have huge consequences.

It is not up to me to judge whether this movie, if it exists, should be forbidden, but I don’t think that we can just hide behind freedom of speech, close our eyes, and hope that the worst won’t happen.

The fact is that freedom of speech should not be used as a freedom to insult. I hope that we in the future will be capable of reacting in these kind of situations with more empathy, tolerance and understanding. It should be possible to de-escalate these kinds of conflicts in the future without undermining the foundation of our democratic society.

And now for Jyllands-Posten’s editorial response:

“Freedom of speech is not freedom to insult” the General Secretary of Council of Europe , Terry Davis writes in a letter to the editor in today’s publication of Jyllands-Posten.

This he has misunderstood.

That freedom of speech should be used with grace and that you should avoid insulting people who react with wanton destruction, murder, and boycotts is now a well known point of view.

The sombre part of this affair is that it comes from the General Secretary of the Council of Europe.

The Council of Europe and its institutions, the Human Rights Commission and the Human Rights Court of Law’ have since their creation shortly after the end of WW2, been standing guard of freedom of speech, if anybody has. While national governments and national courts of law have tried to apply restrictions particularly on the media’s freedom to come forward and share controversial points of view. the Council of Europe has cut through and overruled wrong sentences and little by little changed the administration of the laws in the member states.

Denmark in 1992 appended the Human Rights Convention into Danish law, so that it is now immediately binding for Danish Court of Law.

Freedom of speech has had its best protection and defense in the human rights court of law. In this country we remember all the instances of the Danish courts were employed in the so-called Jersild case, where a journalist let some hooligans come forward with racist statements. The sentence of the hooligans was retained, but the journalist and the TV station were acquitted because it was in the interest of the public to know the very existence of the points of view that made up the foundation of the punishable statements.

The member states of the former East Bloc dictatorships have contributed to the movement of freedom of speech in the right direction. They know the consequence of suppressing freedom of speech.

Therefore it is extremely depressing that the General Secretary of Council of Europe argues for certain considerations to be upheld for people who let themselves be insulted on behalf of billions over some drawings which they could just ignore if they don’t like them.

The General Secretary also uses this opportunity to criticize the Dutch politician Geert Wilders’ movie about the Quran.

“It seems like a cynical and irresponsible attempt to wreak havoc — due to political motives — which potentially could have huge consequences,” the General Secretary writes, and continues “

It is not up to me to judge whether this movie, if it exists, should be forbidden, but I don’t think that we can just hide behind freedom of speech, close our eyes, and hope that the worst won’t happen.

“The fact is that freedom of speech should not be used as a freedom to insult. I hope that we in the future will be capable of reacting in these kind of situations with more empathy, tolerance and understanding.”

Thereby the General Secretary pathetically leans upon scared and irresolute European politicians who do not dare to stand guard on freedom of speech.

If Geert Wilders’ movie is so horrible, as some seem to think, it should be met by arguments, and if anybody should attempt to react in a criminal way this is a police matter.

The Catholic Church and parts of the UN seem to make a joint front with those who want to limit freedom and undermine democracy. The fact that the European General Secretary supports these forces is almost unbearable.

22 thoughts on “There Are Limits”