From The Telegraph, this shocking report: 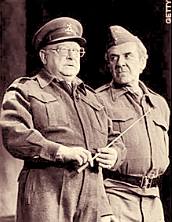 Pinch me, I’m dreaming! Has Brown been reading our emails from disgruntled Brits?

The new force, called a new Civil Protection Network, will be based on the local Neighbourhood Watch schemes.

The Prime Minister said he wanted to see “improved resilience against emergencies” from floods to terrorist attacks.

This would take “not the old Cold War idea of civil defence but a new form of civil protection”.

Or perhaps the PM has noticed the flood of emigrants leaving for a safer haven than the UK can provide? Or maybe he looked at the plummeting numbers of concerned citizens who give him a favorable rating for his efforts so far? There are a lot of angry voters, Mr. Brown.

The Prime Minister also said ministers will also publish an annual risk register of the top threats facing Britain, from the Al Qaeda terror threat to flooding and cyber crime.

People will be asked later this year if they want to join up to help defend Britain’s security and then be given training in how to deal with a number of threats.

– – – – – – – – –
Heh. The Baron told me the context of the reference to “Dad’s Army” and he sang the theme song for me. While rushing around between meetings, he said, “It was a typical mid-’60s British TV comedy, making fun of a pompous old guy — a veteran of the Great War — who ran his little battalion of Home Guard people in WW2 as if it were a real military unit.”

But that’s what is needed now, even if Brown won’t actually let the words past his teeth. The Baron sang the theme song for me:

‘Cos who do you think you’re kidding Mr Hitler,
If you think old England’s done?
Mr Brown goes off to town
On the 8:21,
But he comes home each evening
And he’s ready with his gun.

So watch out Mr Hitler,
You’ve met your match in us,
If you think you’ll push us.
We’re afraid you’ve missed the bus.

‘Cos who do you think you’re kidding Mr Hitler,
If you think old England’s done?

Oops…guns are not politically correct anymore. Maybe people will get some training in krav maga? If you look at the picture on the link, it’s obvious that krav maga is not limited by age. If not that, perhaps cudgels walking sticks for those long patrols? While he says there will be no “uniforms or badges” I don’t doubt that some kind of attire will emerge from this, even if it’s only orange safety vests, visible at night.

In a Commons statement, Mr Brown said: “The primary duty of Government – our abiding obligation – is, and always will be, the safety of all British people and the protection of the British national interest.”

Mr Brown told MPs that the security situation in the UK had changed since the old threats of the Cold War and Irish republican terrorism.

He said the size of the Security Services will rise to 4,000 – twice that of 2001 – and announced an extra 10 per cent funding rise for the Joint Terrorism Analysis Centre.

Mr Brown also said the Intelligence and Security Committee will be subject to enhanced scrutiny and greater transparency.

I think this will counter some of the harm done by the impersonalization brought on by the EU’s “Lisbon Treaty.” And it will be a great stimulus to the cohesion of local communities.

Maybe Brown has finally realized that it is indeed “the primary duty of Government” to keep its people safe. In fact, if the UK doesn’t take care of its own, it will die waiting for help from Brussels.

In the Telegraph’s story there is a link to a pdf booklet, The National Security Strategy of the United Kingdom:Security in an interdependent world. You can get the details if you click on their link.

16 thoughts on “The British Dads Are Coming!”