This is the sixth in a series of letters from AMDG at La Yijad en Eurabia. It’s a cross-post from his own blog; go over to the original for the links to his sources.

The Basque terrorist group, the ETA, has assassinated Isaías Carrasco, a former alderman from the PSOE. He was 42, married and had three children. He worked in a toll station of a highway in the Basque area. 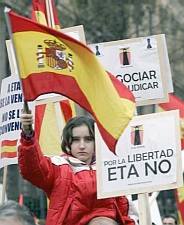 He did not manage to get a seat in the city council of Mondragón — a small town in core of the Basque region- in the last local elections. He had the right to be provided with a bodyguard, but he had declined that well-deserved and more-bitter-than-sweet privilege. He was probably fooled by the secret “peace talks” of Zapatero’s representatives and the ETA. He got five shot at point-blank range from the back while he was with his wife and one of his daughters. May he rest in peace.

The political liturgy after the attack is following the usual script of Spanish politics: formidable condemnation statements by all the institutions and associations, specially the political parties; immediate suspension of all campaign events; massive demonstrations, etc.

That is, theatre for the masses. First, the condemnation statements will refer to the “human right to life”. This is the best way to assure that noting is done in order to prevent the next attack. Basque terrorists are well aware of the “human right to life”; they simply do not care about it. They want the secession of the Basque provinces (together with some neighbouring areas, of course) and are ready to shed blood if needed to achieve their political goals. Under these circumstances, the reference to human rights is out of purpose. This is a political challenge: they want to secede, so you either fight them or you surrender. Insisting on human rights against a terrorist group that has decided to kill is worst than useless: it means letting the situation deteriorate even further to the point of frustration. The answer to aggression is either to fight or to surrender, not to lament it.
– – – – – – – – –
Second, the demonstrations reproduce at people’s level the same false consciousness of the political class. More than ten years ago, after the assassination of a university law professor, some students had the idea to demonstrate by painting their hands in white and raising them up shouting “Enough is enough” (¡Basta ya!). They even set up an organisation, Manos Blancas (white hands). Those law students should know —I assume- that Spain is under the rule of law, which means that everyone is innocent unless a judge says the opposite after a just trial. No one puts in question that those students are innocent. They’d better demonstrate in order to force the government to fight the ETA… or to surrender. And, indeed, that “white hands” symbol suggests an unconditional surrender -especially with hands up- rather than the will to fight back.

Third, all parties have agreed to suspend the campaign. This is the second time in four years, and I do not think this is a coincidence. The ETA has decided to step into the campaign (in my opinion for the second time), and the purpose cannot be but to influence its result. Of course, it is considered ‘politically incorrect’ to speculate on which party will benefit from the death of Isaías Carrasco, but it would also be hypocritical not to do it. Yes, that is the million-dollar question: Cui prodest, Cui bono?

Let us remember the first rule of Spanish politics: the result of Spanish national elections is determined by the vote of the “volatile left” a group of two million voters that vote for the PSOE, but only when they want to avoid a government by the right. If they vote, the PSOE will get a majority in Parliament and then the government, if they do not, the PP may manage to get the government. This attack will decide this people to vote; therefore it will benefit the PSOE. Moreover, it is also the interest of the ETA to keep the PSOE in government. El Pais (our NYT) has already called their readers to the voting stations in its headlines today.

Of course, this will depend on how this crisis is managed. It has been already published that the assassination was ordered by a terrorist who participated in the negotiations Zapatero-ETA, but as the victim is from the PSOE, the PP cannot use it as an argument. Zapatero has got the best possible alibi to claim that it has been duped in his struggle to “bring peace to the Basque Country”. I can bet that tomorrow the PSOE will get a majority in Spanish parliament.

The terrorist attack on the eve of the elections is going to be a repeated pattern of Spanish General Elections.

5 thoughts on “Letter from Spain: The E.T.A. Steps in Spanish Elections”