Other headlines from this morning’s newspapers: 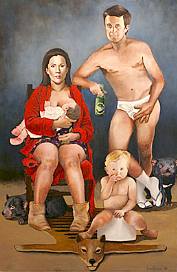 Copenhagen (UPI) — Angry mobs of Danes converged on the Australian embassy in Copenhagen this morning and set the building on fire. As the Australian ambassador fled under heavy police escort, his limousine was pelted with Carlsberg bottles and empty licorice packets.

The violence was triggered by the awarding of a prize to an Australian artist for his painting of Crown Prince Frederik and Crown Princess Mary in their underwear.

“We Vikings cannot tolerate any insult to the Royal Family,” one demonstrator told a reporter.

“Our Grundlov states that anyone who disrespects the Crown Prince must die, preferably very slowly and painfully,” he added, as he held an Australian flag over a candle and set it alight.

He depicted the royal couple in an outrageously vulgar manner that is characteristic of Aussies and Danes alike. Are those two countries soul mates, or what?

The artist said, “I think Mary being Australian, she might have a bit of an ocker sense of humour, she might appreciate it.”

For myself, I’d appreciate an explanation of what “ocker” means.

And the best part? The contest was judged by a cockatoo named Maude.

Go read the story yourself at ABC or The Sydney Morning Herald.