A Berlin gallery has temporarily closed an exhibition of satirical works by a group of Danish artists after six Hasidic Jews threatened violence unless one of the posters ridiculing Orthodox Jewish headgear and tonsorial customs was removed, it said on Thursday. 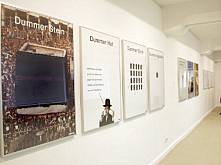 No, that’s not the news story you read yesterday. But it could have been, if Jews were the same kind of thin-skinned and perpetually offended people that Muslims are.

Yesterday’s story focused on Dummer Stein, the first photo in a sequence in a Berlin art gallery’s exhibition. The “Stupid Rock” depicted in the poster is the Kaaba, the holy shrine in Mecca. The gallery closed the show after Muslim youths entered the building and made threats.

The photo on the second poster in the series, as you can see from the larger version shown at right, is captioned Dummer Hut, or “Stupid Hat”.

Each additional poster is also a Dummer something or other, a series of “stupid” things exposed to avant-garde artistic ridicule.

But what’s being ridiculed in that second photo? Whose hat is stupid?

A BBC article on the incident shows the Dummer Stein poster being taken down from the wall. Next to it you can see the Dummer Hut a little more clearly.

I found yet another photo on a Swiss German-language news site.

Which I translate as: “The subject is one of an ironic series, in which is displayed, among other things, an Orthodox Jew, with headgear, under the title ‘Stupid Hat’.”

Through the magic of modern Forensic Photology I have extracted a larger version of the Stupid Hat poster.
– – – – – – – – –

Yes, it’s true: as you can see in the picture, a Orthodox Jew is tugging out his sidelocks while sporting a big dummer hat.

And now thousands of Jews have taken to the streets of Tel Aviv and burned down the Danish and German embassies, while calling for the murder of the Surrend artists.

Need anything else be said?