Geert Wilders has given up trying to have his movie broadcast on any Dutch television stations. The Internet will be the only available venue for the film.

Our expatriate Dutch correspondent H. Numan has sent along a cartoon, a translation of an article, and his commentary.

First the cartoon. The guy with the bullhorn is Dutch prime minister Jan Peter Balkenende: 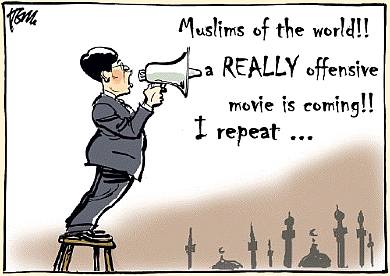 This article is from NU.nl (translation by H. Numan):

The Hague — PVV-leader Geert Wilders is not holding a press conference to present the anti-Koran movie “Fitna”. He is now doing everything possible to make sure the movie can be seen on the Internet by the end of the month.

As no broadcasting corporation was willing to broadcast Fitna, Wilders intended to present the movie in the Press Center “Nieuwspoort” in The Hague. But he would have had to pay the security costs to protect the building. According to the politician, it would cost him several hundred thousand Euros.

He based that figure on a risk analysis, which showed that during a period before and afterwards certain protective measures are required.

“It’s much too expensive” said Wilders Tuesday. He doesn’t want to hold out his hand to the government to cough up the money. The parliamentarian won’t be looking for an alternative location, as this would again lead to discussions and delays.

If no local or foreign company wants to broadcast Fitna without cutting anything in the contents, Wilders wants to go live on the Internet. As soon as possible. But it does need some preparations. For example to prevent the site locking up due to a massive audience downloading at the same time.

From the corridors of parliament, Wilders called upon the prime minister and the secretary for foreign affairs to express their resentment over the demonstrations against Fitna, where Dutch flags have been burned, as has repeatedly occurred in Afghanistan.

In that country parliamentarians hit the street to denounce Wilders’ movie. The PVV leader finds that the cabinet should make clear to the Afghan government that behavior like this will leave them isolated. Wilders referred to the presence of Dutch troops doing reconstruction work in Afghanistan.

Minister Eimert van Middelkoop (Defense) said during a visit to Australia that the Dutch contingent in Afghanistan is not in danger due to the movie Fitna. Several foreign companies claimed they do fear damage due to the movie.

[now a short break for a joke]

The Iranian under secretary for foreign affairs called upon the Dutch government to ban the movie. According to him this is possible based on the Universal Declaration of Human Rights of the United Nations.

[Who said Mohammedans don’t have a sense of humor?]

About what the consequences might be if the 15 minutes movie will be broadcasted the under secretary did not want to elaborate.

In a democratic nation such as Holland claims to be (which is about as bad it can get, while still being called a democratic nation), the government normally doesn’t give a flying fart what the constituents think, or do. Unless it’s election time. If they do have to pay attention to something unpleasant, the media will normally tar the offender as black as coal. And if that doesn’t work, the government plays its ace in the hole: here’s the bill you have to pay.

Nieuwspoort Press Center is the official press center located within the houses of parliament complex. Extra security costs should be carried by the government. Simply because the center is a semi official agency, working strictly for the government and parliament. The extra costs are calculated around €350.000. Which seems a trifle high to me, as the houses of parliament already have a reasonably up-to-date security system. But, if we can’t beat him, let’s make him pay for it.

Which is the ultimate trump card they can play if someone whose name will not be mentioned but who lives in a house with the largest garden in The Hague will utter the words “who will rid me of this pesky politician?” In that case the government easily finds a reason to withdraw Wilders’ security detail, and throw him to the dogs.

It wouldn’t even be the first time. The De Witt brothers were assassinated that way. And it worked very effectively with Ayaan Hirsi Ali.

19 thoughts on ““Fitna” Will Not Appear on Dutch TV”