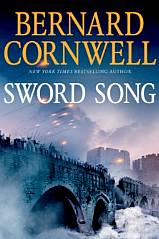 I’m reading Sword Song by Bernard Cornwell, the fourth book in his “Saxon Tales” series. The story focuses on the battle during King Alfred’s reign between the Vikings and the Saxons for control of the Thames estuary and the area around London.

The previous novel in the series, The Lords of the North, was a magnificent rendering of the period of transition in 9th century England, when the culture of the conquered Saxons in the Danelaw was gradually merging with that of the Vikings.

The protagonist of the series is Uhtred, Lord of Bebbanburg in Northumbria. He is recounting in his old age the tales of his youth in the reign of King Alfred, during the height of the wars with the Vikings. Uhtred is a Saxon who was raised by Danes, so he has a foot in both camps, and treats the natives and the invaders with equal respect.

By the time of Sword Song, however, Uhtred has soured on the Vikings after their repeated raids up the Thames into Essex, Wessex, and Mercia.

Here’s a snippet from the book that seems appropriate to our own time and its struggle against a ruthless invader (for context: “Serpent-Breath” is Uhtred’s sword):

Our nameless ship surged into the current as the enemy was swept toward us. Her monster’s head had a tongue painted red, white eyes, teeth like daggers.

“Now!” I called to Cerdic and he threw the grapnel with its chain so that it caught on the enemy ship’s bow and he hauled on the chain to sink the grapnel’s teeth into the ship’s timber and so draw her closer.

“Now kill!” I shouted, and leaped across the gap.

Oh the joy of being young. Of being twenty-eight years old, of being strong, of being a lord of war. All gone now, just memory is left, and memories fade. But the joy is bedded in the memory.

Serpent-Breath’s first stroke was a back-cut. I made it as I landed on the enemy’s bow platform where a man was trying to tug the grapnel free, and Serpent-Breath took him in the throat with a cut so fast and hard that it half severed his head. His whole skull flopped backward as blood brightened the winter day. Blood splashed on my face. I was death come from the morning, blood-spattered death in mail and black cloak and wolf-crested helmet.

I am old now. So old. My sight fades, my muscles are weak, my piss dribbles, my bones ache, and I sit in the sun and fall asleep to wake tired. But I remember those fights, those old fights. My newest wife, as pious a piece of stupid woman who ever whined, flinches when I tell the stories, but what else do the old have, but stories? She protested once, saying she did not want to know about heads flopping backward in bright spraying blood, but how else are we to prepare our young for the wars they must fight? I have fought all my life. That was my fate, the fate of us all. Alfred wanted peace, but peace fled from him and the Danes came and the Norsemen came, and he had no choice but to fight. And when Alfred was dead and his kingdom was powerful, more Danes came, and more Norsemen, and the Britons came from Wales and the Scots howled down from the north, and what can a man do but fight for his land, his family, his home and his country? I look at my children and at their children and at their children’s children and I know they will have to fight, and that so long as there is a family named Uhtred, and so long as there is a kingdom on this windswept island, there will be war. So we cannot flinch from war. We cannot hide from its cruelty, its blood, its stench, its vileness or its joy, because war will come to us whether we want it or not. War is fate, and wyrd bið ful ãræd. Fate is inescapable.

So I tell these stories so that my children’s children will know their fate. My wife whimpers, but I make her listen.

If you like the sample above, I recommend Sword Song, and the earlier books in “The Saxon Tales”.

8 thoughts on “Fate Is Inescapable”