It’s been three years since Bill Gates converted to Islam, two years since our first interview with him, and a year since he became an apostate.

So what’s happened since he left the Ummah and took up calypso last year?

Gates of Vienna ran into the former sheikh and software magnate on the Streets of San Francisco. He asked me for spare change, and I did a double take when I realized who he was — with the scraggly beard, baseball cap, and nicotine-stained teeth, I barely recognized him.

He squinted at me suspiciously and said, “What’s it to ya, bro?”

I bought him a pack of Lucky Strikes and a bottle of Wild Irish Rose in an attempt to break through his reserve, and we adjourned to the nearby Panhandle so that he could enjoy his good fortune in the shade. He lit a Lucky while crossing the street into the park, and when a mendicant transvestite approached him in an attempt to cadge a cigarette, he snarled, “Sod off, poofter!” without even breaking stride. 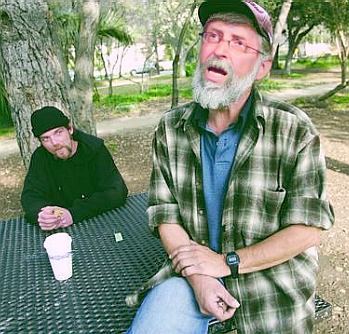 Gates settled down at a picnic table in the shade, and after a long pull from his bottle, he agreed to answer a few questions. Another homeless guy approached and was introduced to me as Bonesaw as Gates handed him a cigarette. “We’re even, now,” growled Gates.

Bonesaw gave me a gap-toothed grin. “That Sliderule! He allus knows how many he owes. He still got what it takes up here, ya know?” he said, tapping the side of his head.

I looked at the erstwhile billionaire.

“Yeah, that’s what they call me ’round here now.”

Sliderule’s voice trailed off as he turned towards Bonesaw and gave an almost imperceptible nod. The two men rose simultaneously and sauntered away, trailing a cloud of Lucky Strike smoke as they disappeared into the trees.

7 thoughts on “Bill Gates: In Hiding From a Fatwa”