I wrote yesterday about the kidnapping of Wolfgang Ebner and Andrea Kloiber, two Austrian tourists who were on holiday in Tunisia back in February when they were abducted by a North African subsidiary of Al Qaeda.

The kidnappers have now issued an ultimatum and set the terms for the release of their captives. According to the AP:

Al-Qaida’s branch for North Africa on Thursday set a three-day deadline to meet conditions for the release of two Austrian tourists it claimed to have kidnapped in Tunisia last month. 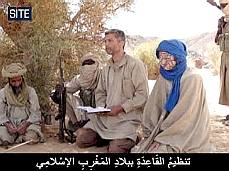 In a statement posted on the Internet — which included six photographs purportedly showing Austrians Wolfgang Ebner and Andrea Kloiber — al-Qaida in Islamic North Africa said it would free the pair if all of the group’s members were released from jails in Tunisia and Algeria. The posting gave Austrian authorities three days, starting midnight Thursday, to comply.

The statement, the authenticity of which could not be independently verified although it was posted on a Web site linked to the group, also called on Western tourists to avoid visiting the Maghreb region in northern Africa.

It’s interesting that the terrorists consider the Austrian government to be so powerful that it can engineer the release of prisoners from jails in Algeria and Tunisia. Is the arm of Austrian diplomacy that long? And all within three days!

Actually, one assumes that the kidnappers are just making their initial offer, and will eventually dicker the payoff down to a specific dollar amount.

As usual, blame is assigned to the Austrians for any unfortunate outcome. In this particular sleight of moral calculus the terrorists will no doubt be willingly assisted by the Western media:
– – – – – – – – –

“Austria is responsible for the lives of the two hostages in the event of the expiration of the time period and not responding to our demands,” it said and urged families of the two Austrians to pressure their government to meet the group’s demands.

Mr. Ebner’s face is fairly clear in the photos, but not Ms. Kloiber:

The woman in the photographs, said to be Kloiber, was shown wearing a headscarf and her face was obscured. According to extremist Islamist beliefs, showing a woman’s face in public and in images is prohibited. Both she and the man, who had a graying mustache and a short beard, were wearing traditional Arab robes.

In one of the photos her face has obviously been digitally altered. But in the one shown here, it seems more likely that a piece of hexagonal mesh netting was pulled over her head before the cloth was draped around it. Using the science of forensic photology, I have enlarged the image, and it looks like a section of camouflage netting may have been used to obscure her features.

The statement also said the Austrian government has been informed of the kidnappers’ demands and that they had handed over to unnamed “negotiators” a list of detained members they want released. There were no details on how many names were listed.

And the big bucks. Don’t forget the payoff.

I’m sure they’re expecting an amount of Euros reaching into at least the seven-figure range.

Al-Qaeda in the Islamic Maghreb is a terrorist organisation emerged from the local Islamist insurgency movement, the Salafite Group for Preaching and Combat (GPSC).

The “Al Qaeda Organization in the Islamic Maghreb”, also known as “Al Qaeda in Islamic North Africa” is essentially the same outfit as the Salafist Group for Call and Combat , Groupe Salafiste pour la Predication et le Combat (article in French). It was one of a number of groups that emerged in the 1990s in reaction to the crackdown on Islamist groups by the military government of Algeria.

GSPC considered disbanding and taking advantage of an amnesty offered a few years ago by the Algerian authorities. However, a little push from Ayman al-Zawahiri changed their minds, and last year the GSPC was formally renamed, becoming a regional subsidiary of the Al Qaeda organization.

Their declared targets include American and French interests in addition to the Algerian government.

One thought on “Al Qaeda Issues an Ultimatum”