“The Repetition of History”
by Theodore G. Karakostas

We are very fortunate in our readers. They supply us with information we wouldn’t get easily in other forms. In this case, the essayist is Theodore G. Karakostas and the subject is one he knows well: the roots of the current crisis in Serbia and Kosovo.

But this post is much more than that. Mr. Karakostas opens the door to the long history of the area, and the bloody borders created there by the influx of Islam so long ago. He says:

I would like to express how much I like your website. I am a writer coming from an Eastern Orthodox-Byzantine point of view and a Greek American and would like to share such an assessment regarding the new Islamist success in Kosovo over the past week.

And here is his provocative essay:

In November 1979, Iranian militants seized the American embassy and took hostages for 444 days. Throughout the 1980’s, the Iranians launched a variety of attacks on American targets (as in Lebanon) and sponsored terrorism. During the 1990’s Al Qaeda attacked the United States in Somalia, Saudi Arabia, and bombed the American embassies in Africa. On September 11, 2001, Al Qaeda attacked the United States on its own soil.

The reaction of the United States has been to destroy Yugoslavia. Osama Bin Laden, Ayman Al Zawahri, and Al Qaeda remain at large. Al Qaeda in fact, according to Youssef Bodansky, terrorism expert and biographer of Osama Bin Laden established bases in Kosovo and Bosnia. In 2006, Muslims from Kosovo were implicated in the plot to bomb Fort Dix in New Jersey. The reaction of the United States is to ignore the very spirit of the alleged war on terror and to approve the establishment of a terrorist Islamic State in the Balkans at the expense of the Serbs who were allies of the United States in both World Wars.

When did the United States become the Islamic Republic of America? My own idea is that the United States drifted toward pro-Islamic sympathies when it became involved with the Turkish nationalists between 1919 and 1922. Today, many of the Western backers of independence for Kosovo were also those States who armed and supported Mustafa Kemal and the Turkish nationalists in Asia Minor. Italy, France, and Great Britain have extended immediate recognition to Kosovo.

In 1919, the Italians were the first European power to arm Mustafa Kemal in Asia Minor. According to Marjorie Housepian Dobkin in her brilliantly researched “Smyrna 1922 the Destruction of a City” the Greek Army might have destroyed Mustafa Kemal’s Army had it not been for the intervention of the Italians and the British who according to Dobkin, rescued Kemal from destruction. The connection between the betrayal of the Greek cause in Asia Minor, and the betrayal of the Serbs today reflects the continuing evolution of Western policy which is in effect pro-Islamic. 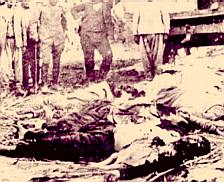 Turkey’s recognition of Kosovo was to be expected. The Turks are reestablishing links with their former Muslim subjects and expanding their influence in the region at the expense of Greece and Serbia. In 1922, in the aftermath of the Genocide and mass slaughter of Greeks at the City of Smyrna, the Greeks wanted to make a last stand in Eastern Thrace, and pondered the possibility of entering Constantinople. The Greeks were told in no uncertain terms by the three European Powers that if they entered Constantinople, they would not be permitted to remain there. Ultimately, over 1,000,000 Greek Orthodox Christians were ethnically cleansed from Asia Minor with the full cooperation of the Americans and the three European Powers.

During the 1990’s, the Serbs were ethnically cleansed from Krajinna by the Nazi armies of Croatia and from Bosnia. They have also been ethnically cleansed from Kosovo since 1999 with their Churches and Monasteries being destroyed. In both Asia Minor and Yugoslavia, the Western powers were present when the Christians were slaughtered by the Muslims. Today, NATO and the European Union talk of protecting the rights of Serbs in Kosovo, and of maintaining “peacekeepers” even while Serbs have been lynched, murdered, beaten, and terrorized into leaving under the auspices of the “peacekeepers”.

During the fall of 2007, a resolution in the House of Representatives was introduced which would have recognized the Armenian Genocide. The Bush administration lobbied against it, and intimidated many of the Democrats who supported it, into withdrawing their support. The extermination of a Christian people by an Islamic government was not recognized in order to placate the Islamic successors of the Genocidal regime! One would think that Islamists were dictating American policies.
– – – – – – – – –
Over two million Christians in the Sudan have been slaughtered by the Islamists. The Coptic Christians of Egypt have suffered relentless discrimination and persecution by Islamic extremists. Saudi Arabia prohibits the practice of Christianity. While Monasteries in Kosovo are being destroyed, the Saudis are subsidizing the construction of Mosques in Kosovo, which fly the Saudi flag. In the struggle between Armenia and Azerbaijan over Nagorno-Karabakh, the West is backing the Muslims.

Then there are the benefits of European multiculturalism. The European Constitution does not mention Christianity (a fact which outraged the Orthodox Church of Greece). Various feminists in the European Parliament have suggested that the Monastic Republic of Mount Athos should be compelled to lift its prohibition on the entry of women onto its hallowed grounds. This Orthodox Monastic community established on the Holy Mountain of Athos which is dedicated to the Theotokos (Mother of God) does not allow women in order to specifically honor the Theotokos. The Orthodox Church of Greece has bitterly resisted the attempts by the European Union to undermine Greek traditions and to impose secularism on Greek society.

Contrast these radical anti-Christian stances with the recent statement of the Archbishop of Canterbury who suggested that Sharia law should be allowed to coexist with Civil laws in Great Britain. It is not ironic that the capitals of Europe are being thoroughly Islamicized, or that they are being held hostages (the riots in France 2005) by extremists, considering the extent to which Eastern Christians have been sacrificed throughout the twentieth century. Gone are the days of the Austro-Hungarian Empire which saved Europe from the Ottoman Empire in 1539 and 1683.

A Rock Concert in Croatia recently received a great deal of publicity because the band in question proceeded to give the Nazi salute. The wars that were waged against the Serbs during the 1990’s were waged by a government of Nazi sympathizers on the one hand, and two Islamic governments in league with Al Qaeda on the other. The 800,000 Serbs that were slaughtered by the pro-Nazi Croats and Muslims during the Second World War were entirely ignored by western media.

The Republic of Cyprus is another Christian country struggling to survive. Over 500 Greek Orthodox Churches have been destroyed or converted into Mosques. From Cyprus to Kosovo, Christianity is being eradicated and the destroyers in both cases are being embraced by Europe and the United States. The Greek Orthodox in Constantinople are on the verge of extinction. The betrayal of the Greek Christians of Constantinople since the 1940’s represents another heartbreaking tragedy in the history of the Orthodox Church during the twentieth century.

Turkey today is notoriously anti-American. Islamic fundamentalism is faring quite well despite the assurance of American and European officials that Turkey is a “secular, democratic” country. Ordinary Turks have become enraged by American policies toward Iraq and the Palestinians out of Islamic solidarity, but Ankara’s public relations people have successfully convinced many Americans that Turkish-American relations were fine until Nancy Pelosi introduced the Armenian Genocide Resolution in Congress. When the Iraq war was launched in 2003, Turks cursed the United States for attacking a Muslim country long before the Armenian Genocide Resolution was introduced.

Western sacrifices of Christians preceded the pro-Turkish policies undertaken between 1919 and 1922. During the nineteenth century, Tsarist Russia took up the cause of the Christians of the Ottoman Empire. In 1853, Great Britain and France occupied Greece to prevent Athens from aligning with Moscow in the Crimean War. In 1878, the Russians had Constantinople in their sights, but the Ottomans were protected by London and Paris.

During the 1870’s, the slaughter of the Bulgarians by the Ottoman Turks was widely publicized. As the nineteenth century concluded, the Armenians, Assyrians, and Asia Minor Greeks came under extreme persecution by the Ottomans. International conferences were convened by the three great powers of Great Britain, France, and Russia. Only the Russians were interested in protecting the Christians, as in Kosovo today. The strategic interest in the Ottoman Empire by London and Paris prevented the Russians from interfering. 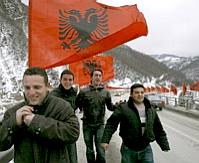 This essay is a response to the events being undertaken in Kosovo and the Balkans today. It is extremely difficult to believe that in the age of Al Qaeda, the Great Powers maintain an irrational hatred of the Serbs and the Russians. The essay began by noting the various terrorist attacks on the United States. The Serbs have done nothing to the United States or the Europeans, and have found themselves being mercilessly deprived of their ancestral homelands and holy places.

The Western governments have chosen to restore the heritage of the Ottoman Empire in the Balkans. Several years ago, then Assistant Secretary of Defense Paul Wolfowitz praised Turkey for its treatment of minorities! In 1204, the Knights of the Fourth Crusade destroyed Constantinople and opened the door for the Ottomans. What the Crusaders did physically to the Christian East, the Western powers are doing intellectually by suppressing and rewriting the history of the Christian East. 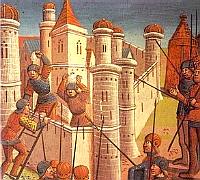 During the Seventh Century, the Emperor Constantine V of Constantinople successfully defended his Capital from the onslaught of Muslim invaders. He successfully defended the West as well as his own Empire. During the tenth century, Emperor Nikephoras Phokas took the offensive against the Arabs after three hundred and thirty years of being on the defensive and liberated most of Syria! In 1453, Emperor Constantinos Palaiologos died in battle defending his City against the Ottomans.

How tragic that the legacy of Christian Byzantium whose Emperors took up the fight against the forerunners of Osama Bin Laden has been cast aside as the model for the Balkans in favor of the Ottoman Turks who were the perpetrators of terrorism and Genocide. This is exactly what the sacrifice of Orthodox Serbia represents. In our own day, the Russians again represent the aspirations of Orthodox Christians, and it is to be hoped they will help save Kosovo and the Balkans.

65 thoughts on “When did the United States become the Islamic Republic of America?”