I posted the other day about the rash of “balcony incidents” in Sweden, a series of suspicious deaths of young girls who fall or are pushed from apartment balconies. Most of these deaths are assumed to be honor killings.

The most recent incident was in Malmö; Esther at Islam in Europe has written extensively on this topic. Our Swedish correspondent LN pointed us to this interesting new twist in the case, from an article in the Norwegian newspaper Dagbladet. A letter purporting to be from a witness to the murder was found at the scene of the killing. Our Danish correspondent TB has kindly translated the text of the letter, and also the article about it.

Note: This is a Swedish story which was covered by a Norwegian newspaper, brought to our attention by a Swede, and translated by a Dane. That’s Multiculturalism, Gates of Vienna style.

The text below is TB’s translation, with his own explanatory remarks in italics:

In the letter that appears on the photograph in the beginning of the article it says something like (not precise):

Why should this happen to you. I saw it. What kind of pigs they were those who did this to you. I saw you being pushed out from the balcony by these two pigs. What have you, as a girl, done to deserve a punishment like this.

Beneath the first photograph it says:

This letter was found outside the house where a 16 year old girl where pushed to her death in Malmö on Sunday. The writer of the letter is unknown, but could be from an important witness.

This letter was found on the scene where a 16 year old girl was pushed to her death. 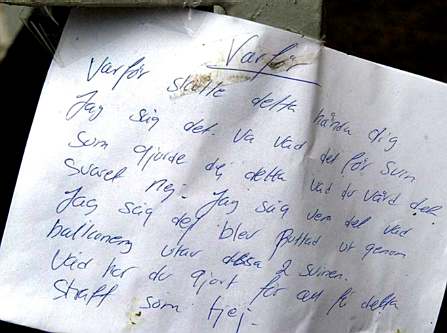 (Dagbladet.no): Monday the police caught two men under suspicion of having pushed a 16-year-old girl off the balcony on the fourth floor. The two men are the stepfather (38) and the brother (19) of the victim, who fell to the concrete and died instantly.

The police work from the theory that it is a so-called “honor killing”.

Two days ago a mysterious piece of paper was found on the crime scene which could have been written by an eye witness, Expressen.se writes. In the letter it says, among other things:

“I saw you being pushed from the balcony. What have you done as a girl to deserve this punishment.”

Several people witnessed the girl being pushed but only a few of them have been interrogated. One of those that the police have talked to is a 22-year-old man who was first interviewed by Kvällsposten [Swedish Newspaper]. He criticize the police for asking people who where near the crime scene to go away. Several of these people could be important witnesses, he thinks.

“They must have seen everything”

“Four teenage girls stood right in front of the balcony. They saw exactly what happened,” he says, and gets support from his neighbor.

“They must have seen everything.”

The mysterious letter could have been written by one of these girls, but according to what Kveldsposten knows, the police detectives have not been able to establish any contact with them. The writer of the letter is still unknown.

3 thoughts on “What Kind of Pigs?”