Serbian reaction to the West’s recognition of Kosovo’s independence sparked a huge demonstration:

Approximately 200,000 Serbs attended a rally today protesting Western recognition of Kosovo’s independence. Afterwards mobs surged through the streets attacking various embassies, including the American. The crowd briefly broke into the embassy and burned part of it.

There are numerous reports in the MSM and in the blogosphere. They disagree about the numbers – some say 150,000:

A protest of at least 150,000 Serbs in Belgrade turned violent on Thursday when protesters stormed the US embassy and set the building alight.

Several hundred protesters attacked and broke into the city’s US embassy and set the building on fire. The building is closed.

The protest was against Kosovo’s declaration of independence on Sunday and US support for the move.

The most complete report I’ve found is from a Swiss site, which links to Reuters. Among other things, it said that “Washington reacted with cluelessness anger.”

The embassy had already been stoned on Sunday, and some of the windows were boarded up. Does Washington think this kind of outrage will simply go away?

Needless to say, the UN mouthed the usual bromides. Sing along with me:

“I’m outraged by the mob attack,” said its ambassador to the United Nations, Zalmay Khalilzad, who added he would ask the U.N. Security Council to condemn it unanimously in the latest diplomatic shockwave from Kosovo’s secession on Sunday.

Is he really that cynical or merely a moronic bureaucrat earning his daily bread? I vote for #1. 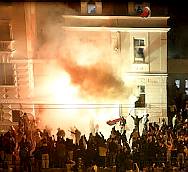 The violence — which spilled over to other embassies and included widespread vandalising of shops and banks — marred a mass state-backed rally by up to 200,000 Serbs refusing to accept the loss of their religious heartland Kosovo.

“As long as we live, Kosovo is Serbia,” Prime Minister Vojislav Kostunica told the crowd from a stage in front of the old Yugoslav parliament building in Belgrade.

“We’re not alone in our fight. President Putin is with us,” he said, paying tribute to the Russian leader who has opposed U.S. and European states’ recognition of Kosovo.

The “people’s rally” was Serbia’s biggest since protesters filled the streets in 1999 to protest at NATO bombing and then in October 2000, when they stormed the same parliament building to oust nationalist autocrat Slobodan Milosevic.

The atmosphere had been subdued as Serbs of all ages listened to speeches, melancholic patriotic songs and poems about Kosovo, seen as the birthplace of a glorious medieval kingdom but now home to an Albanian majority.

When the rioters – mostly the young – stormed the boarded-up American embassy, the police were nowhere to be seen. They didn’t move in for another half hour, which gave the rioters plenty of time to wreak havoc:

Police in armoured vans secured the streets and tried to cordon off the whole embassy district, just a few hundred metres (yards) from the official rally. People tried to flee clouds of painful teargas.

Rioters — many wearing balaclavas and scarves to hide their faces — had attacked the building with sticks and metal bars after destroying two guard boxes outside.

They ripped metal grilles from windows and tore a handrail off the entrance to use as a battering ram and gain entry.

One man climbed up to the first floor, ripped the Stars and Stripes off its pole and briefly put up a Serbian flag.

Other people jumped up and down on the balcony, holding up a Serbian flag as the crowd below of about 1,000 people cheered them on, shouting “Serbia, Serbia”.

Black smoke billowed out of the embassy. Papers and chairs were thrown out of the windows, with doors wedged in the window frames and burning.

Some 200 riot police arrived later, driving the crowd away. Some protesters sat on the ground, bleeding. Fire engines arrived to put out the flames, local media reported.

This was a minority of the crowd that turned out for the rally. The main contingent set off for prayers at the Cathedral:

Meanwhile, the main rally proceeded as planned with a march to the city’s biggest Orthodox cathedral for a prayer service.

State television switched between scenes of the rioting and the serenity of choral singing at the church service.

In the crowds at the main rally were many hardline nationalist Radicals, from Serbia’s biggest party, who shouted anti-Albanian slogans.

“Today Kosovo is in all our hearts,” their leader Tomislav Nikolic told the rally.

In contrast to the violence by up to 5,000 mainly young rioters, the lack of passion in the main rally crowd appeared to support comments by Western analysts and some ordinary people here that most Serbs were bitter at but resigned to the loss of Kosovo and tired of years of conflict with neighbouring states.

There is also deep humiliation at the lack of world support, and fear for their countrymen, now blocked off from them:

“The politicians are trying to take advantage of the situation. This is not what people wanted. Not these empty words,” said one protester, Dejan Pavlovic.

“The loss of Kosovo is a huge humiliation. It’s awful what they are doing to us,” said Danica, a government employee who did not want to give her surname.

“I don’t think this protest might change anything, but I don’t see any other way to express my dissatisfaction.”

Obviously, we have not seen the last of Serbian dissatisfaction at what they consider a huge and criminal injustice. Meanwhile, the fate of their fellow Serbs in Kosovo will shortly become even more of a humanitarian crisis than it already is.