Last year the Baron wrote about the planned building of a mosque in Gothenburg. The new mosque is being funded by a radical Wahhabist group from Saudi Arabia, with the approval of the Swedish authorities.

In the latest twist to this story, some unknown vandals have been making free with pigs’ heads to express their deep unhappiness with the upcoming mosque. I certainly hope they were from an abbatoir and already due for their turn on our tables. Otherwise, it’s a horrible waste of perfectly good pork…oh, dear — I hope I haven’t offended the part of our readership made up of PETA advocates.

Here’s the story from Göteborgs-Posten, as translated by our Danish correspondent TB. 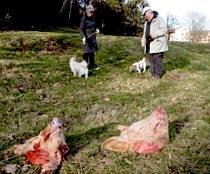 Two chopped-off pigs’ heads were found yesterday on the ground at Ramberget where a mosque is about to be built.

“One thing follows another. The development is going in the wrong direction,” Bachar Ghanoum comments.

He is a doctor and the vice-spokesman for the Swedish Muslim Foundation (Sveriges Muslimske Stiftelse), which is about to build the mosque at Myntgatan in the southern part of Ramberget.

He had not heard about the macabre discovery when GP called.

“Yeah… how are you supposed to react to such things? I see it as an action that follows the third publication of the Mohammed drawings. Everything in this climate encourages this kind of behavior. It is a way to insult Muslims and Islam as a religion.”

This “climate”, according to Bachar Ghanoum, has recently been getting worse and worse, and has had the effect that people who previously kept their insulting perceptions to themselves are now letting it out into the open.

He receives hostile letters and phone calls himself on a regular basis.

“There is maybe a letter every month and sometimes I receive anonymous phone calls. I get worried, but it is not something that makes me stop.”

The planning of the building continues

The same thing applies to the building of the mosque. Since the financing from Saudi Arabia was made available in April of last year, the planning goes on.

“We will be starting the project in maybe a few more months. We hope to start building during the summer.”

The chopped-off pig heads were lying fully visible twenty meters from the road, on the grass at Myntgatan where the mosque is about to be built.

“When I saw them I knew instantly that this was about someone who did not like the plans for building a mosque,” says Mario Curkovic, who made the discovery at noon yesterday.

He lives at Kvilletorget and usually passes by the place when he takes a walk with his dog.

19 thoughts on “Once More with Feeling: Pig Heads at a Mosque Site”