Family Security Matters has the most comprehensive post I’ve seen on the (probably) al-Qaeda-sponsored plan to kidnap a British Muslim soldier, torture him, and eventually behead him – all for the entertainment of their fellow-fundamentalists. First they give the background story at Western resistance from last year:

In January 2007, police carried out raids in Birmingham. At the time, there was hostility and resentment from Muslim “representatives” to the raid. Dr. Mohammad Naseem, chairman of the Birmingham Central Mosque, claimed Britain was becoming a police state, and compared Muslims in Britain to Jews living under Hitler. Mahmoud Shadrajeh, head of the improbably named “Islamic Human Rights Commission” – himself a supporter of Hizbollah’s terrorism – claimed the Birmingham raids gave to the public a “bad image” of Muslims.

Adam Mussa of the Muslim Brotherhood-founded Muslim Association of Britain (MAB) claimed: “Some of the people arrested are just individuals with loud voices, who are vocal about various neighborhood issues, but that doesn’t make them terrorists. It’s not fair. This seems to be happening again and again. This is a form of victimization and your average ‘Mo Public’ is feeling very cynical. When you come in and do a job you should make sure you clean up after yourself, and that’s what the police need to do here.”

The raids happened as there had been intelligence that a cell of British Islamists had planned to kidnap and behead a Muslim soldier. A particular Muslim soldier had already been targeted, and was under protection. It was revealed shortly after the arrests that he was a corporal in military intelligence, chosen from a shortlist of 25 individuals.

Adam Mussa justified his hostility to the Birmingham raids by ridiculing the notion of such a plot. He said: “So for a Muslim to kill another Muslim is much worse, it’s like killing a member of your own family, because they share the same beliefs as you.”

Salma Yaqoob of George Galloway’s “Respect” party who is a Birmingham City Councillor, representing Sparkbrook, said: “The reality is that people are asking why are we being picked on, why are we being persecuted, because that’s what it feels like when all they want to do is get on with their day-to-day lives.”

Fat lot of good that did…the Muslim community is not reassured by leaflets, and the grievance mentality of being “picked on” appears to be the default emotional condition of the majority of British Muslims.

At any rate, plans went forward:

A total of 25 soldiers had been on the terrorists’ “hit list”. The British Muslim soldiers on this hit list lived at addresses from the West Country to Glasgow. There are said to be hopes that no “mole” within the Ministry of Defense provided the alleged terror cell with inside information on the soldiers on the hit list.

24-year old Lance Corporal Jabron Hashmi last summer became the first British Muslim soldier to be killed in Afghanistan, and his death had been celebrated by Islamists of the now-banned group Al Ghurabaa. Al Ghurabaa had been a spin-off from Omar Bakri Mohammed’s Islamist Al-Muhajiroun group. Disturbingly, considering the raids of Wednesday happened at locations in Birmingham, at Sparkbrook Mosque in Birmingham, Channel 4’s Dispatches filmed undercover. Here, an imam said last summer: “There was an individual who was killed in Afghanistan recently. A Muslim name, he came from a Pakistani family. Do you know what they had written in a tabloid newspaper? ‘Hero of Islam’. ‘Hero of Islam’ who went into Muslim Afghanistan to kill Muslims. Why? Because their crime is implementing Islam. The ‘Hero of Islam’ is the one who separated his head from his shoulders.”

Family Security Matters has been following the trial: 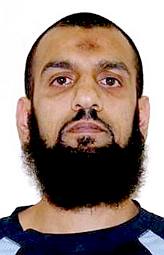 Those shrill cries claiming persecution can now be exposed as false. A trial is currently taking place in Leicester Crown Court. And it is only now revealed that 37-year-old Parviz Khan, one of the nine people arrested in late January and early February 2007, has pleaded guilty to plotting to kidnap and decapitate a British Muslim soldier.

Khan, an “unemployed charity worker,” admitted his guilt earlier this month, but the news was suppressed until a trial involving two other individuals, Amjad Mahmood, 33, and Zahoor Iqbal, 31, began. These two denied involvement in the plot.

– – – – – – – – –
What I hadn’t been able to find is any commentary on Mr. Khan’s bruised forehead. Had the police been having a go at him with billy clubs, perhaps? Why no mention of it by the MSM? Strange that it would go unremarked…

Well, sorry, this is nothing as pedestrian as torture. What creates these Muslim stigmata is the effect of devout head-pounding fervor. Fundamentalist Muslims do not touch their head to the ground in prayer. Instead, they bounce their cranium forcefully onto the stone floors on which they kneel. Performing this act of adoration five times a day will get you that prune-shaped hematoma our head-banger suspect now sports. By their bruises you shall know them.

And these people have the nerve to complain about Gitmo…