They have worked their will on John Barleycorn
But he lived to tell the tale,
For they pour him out of an old brown jug
And they call him home brewed ale.

— from “The Ballad of John Barleycorn”, an English folk song 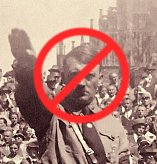 Almost sixty-three years ago the armed forces of the Allies finished destroying all the significant military assets of the Nazi regime. The remnant of the German military under Admiral Dönitz surrendered, and the Allies occupied Germany. When Soviet troops entered Berlin and arrived at Hitler’s bunker under the Reichskanzlei, they discovered that der Führer had killed himself, after which his faithful servants had doused his corpse with gasoline and burned it in the garden above the bunker. Hitler was dead. The Nazis were finished.

But, like John Barleycorn, Adolf Hitler lived to tell the tale.

In sixty-three years scarcely a political argument has occurred without one side likening the other to the Nazis. Thanks to the miracle of internet searches, one can discover 708,000 online comparisons of George W. Bush with Adolf Hitler. Gates of Vienna is a “neo-Nazi hate site”. The government of Israel consists of “Zionist Nazis”. Denying food stamps to illegal aliens in the United States constitutes a “bureaucratic holocaust”.

Virtually no political discussion can proceed without a reductio ad hitlerum. Godwin’s law is now operative not just in online discussions, but everywhere — in cocktail party conversations, school curricula, debates between politicians, and literary manifestos.

When I was in college, one of my friends used an amusing tactic during arguments: when his opponent said something which he found difficult to answer, he would say, “That’s what Hitler said!” He was joking, and everyone present knew he was joking. The room would break up in laughter, and the conversation would move on to other topics.

But it’s not a joke anymore.

Nazis, Nazis, Nazis! Nazis are everywhere, behind every tree, under every bed, waiting in the wings, ready to resume their quest for worldwide domination.
– – – – – – – – –
Any time the tenets of political correctness are questioned: Nazi!

Whenever a political opponent disagrees: Hitler!

I bring all this up because of a discussion that occurred in a comment thread about the Grand Mufti of Jerusalem.

Snouck, Fellow Peacekeeper, and others assert the pointlessness of likening the Palestinians to the Nazis. The currency of Nazism has been so devalued that it no longer serves any useful purpose to compare current political groups or persons to the Nazis or Hitler.

That horse has been beaten to death. It’s a spent scene, man.

Historically speaking, the connection between the Arabs we now know as “Palestinians” and Adolf Hitler passed through the Grand Mufti of Jerusalem, Mohammad Amin al-Husayni. But beyond that, the affiliation was very slight.

Modern Palestinians are like the Nazis in only two ways: they support a totalitarian political movement, and they want to exterminate the Jews.

That’s it. They don’t promote an ideology of racial supremacy. They have no fantasies of Götterdämmerung. They do not advocate eugenics, or sterilize the unfit.

Oh, yes, they fight pitched battles in the streets with rival factions, and tend to solve political arguments with automatic weapons. But they hold that in common with virtually every illiberal political group on the planet.

Looking at the general case, any group that pushes totalitarian methods could be compared with the Nazis: Kim Jong-il, the Chinese Communists, Hugo Chavez, the Social Democrats in Sweden, Robert Mugabe… All of these thugs are like Hitler.

Hitler has outlived his usefulness. It’s time to put him back in his bunker and bulldoze the rubble over him.

I invite other bloggers and commenters to take the Pledge:

I, [insert name here], do solemnly swear that I will no longer invoke the name of Hitler, nor will I compare any current person or group to the Nazis.

The Pledge will be tough to carry out. We’re all so used to Hitler — how can we live without him? Who else can we use as a comparison when we encounter someone really, really bad?

Hitler and the Nazis will continue to be acceptable in historical discussions, and any comparisons with their contemporaries — with, for example, Tojo, Mussolini, FDR, or Stalin — are perfectly appropriate.

But wouldn’t it be nice if no one ever compared his current ideological opponents to Hitler?

You may say that I’m a dreamer, but I’m not the only one…

37 thoughts on “Imagine There’s No Hitler”