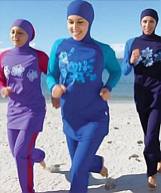 Two Muslim women have successfully sued the authorities in Gothenburg, Sweden because it required them to wear the same clothing as other parents who brought their children to swim at the municipal pool.

Instead of the required T-shirt and shorts as safety attire for adults attending children while near the water, these parents demanded the right to come to the pool while wearing veils and long pants and long-sleeved T-shirts. In other words, they have the “right” to wear just the kind of clothes that would hamper anyone who had to jump into the pool to grab a kid who was in over his head and panicky:

The Court of Appeal for western Sweden found the City of Gothenburg guilty of ethnic discrimination and ordered the authorities to pay the women 20,000 kronor ($3,000) each in damages.

In its judgment, the court said that the actions of the swimming pool lifeguards, who insisted that the women should change into tee-shirts, could be deemed discriminatory even if this had not been their intention.

The nature of Sweden’s discrimination laws mean that it was up to the City of Gothenburg to prove that the request for the women to remove some of their clothing had nothing to do with their religion.

“In the view of the Court of Appeal, the City of Gothenburg did not succeed in doing this,” the court said in a statement.

In March last year, Gothenburg District Court ruled that the municipal pool had not discriminated against the women.

One is led to ask how any municipality is able to anticipate ahead of time the reckless behavior of its citizens so that laws can be in place beforehand to prevent questionable or potentially reckless behavior.

This whole episode reminds me of the story the Baron tells about a local mom who was going away for a few days and left her older teenagers in charge. While she was gone, they (needless to say) had a party and someone’s careless cigarette use resulted in a bad fire. The Baron said, “I’ll bet she gave them plenty of rules. She just forgot to say, “and while I’m gone don’t burn the house down.”

The Court of Appeal obviously does not accept the notion of “The Reasonable Man Person”:

The “reasonable person” is a hypothetical individual who is intended to represent a sort of “average” citizen. The ability of this hypothetical individual to understand matters is consulted in the process of making decisions of law. The question, “How would a reasonable person act under the same or similar circumstances” performs a critical role in legal reasoning in areas such as negligence and contract law.

And had one of the children of these mothers come to harm in the swimming pool do you think they would also be suing the same authorities?

Practitioners of fundamentalist religions have no room in their doctrine for reason, or for free will, either. That kind of thinking is not confined to Islam…and it doesn’t matter, really, unless you demand to be the exception to reasonable behavior and thereby potentially place your child in harm’s way.

For example, in this country (and I am sure in many others), a parent whose religious beliefs interfered with their child’s health – e.g., a doctrine that didn’t permit blood transfusions for a hemophiliac child – would be over-ruled by the courts. I have seen doctors go to court to get emergency legal permission to give responsible care to children who have come into the hospital for treatment.

The demands of the parents were over-ruled by the courts in the cases I saw. And sometimes the parents were secretly grateful. One woman admitted to me that it was a relief to have her child taken care of this way since her religious doctrine prevented her from acting as she really wanted to. Dogma can be a very powerful peer pressure; sometimes its tenets transcend the facts on the ground.

Which makes me wonder: were these women acting of their own free will, or was the legal case the demand of watchful husbands? Left to their own devices would the women have appeared at the pool and changed in the locker rooms into shorts and T-shirt?

My aunt, a Franciscan nun, was very happy to see those old, hot and heavy habits made optional with the advent of Vatican II. Back in the old days, before such a thing would ever have been considered, she was the principal of a school in Tybee Beach (Georgia). I would go to visit her sometimes in the long summer vacations. To my astonishment, in the cool of the early evening, she and the other nuns would change into bathing suits, grab towels and head to the beach (a block or so away). I was amazed: nuns had legs!

Looking at the other news in the Local, Sweden is full of social problems and quandaries brought on by the socialist environment:
– – – – – – – – –
More People, Especially Women, Attempt Suicide…of course there is no breakdown by race. That’s a no-no. Instead, much hand-wringing for the press:

“This is a terrible development, and we have no scientific studies that explain why, although the social climate is tougher these days,” Professor Britta Alin Åkerman at the Karolinska Institute’s Institution for Suicide Prevention told Svenska Dagbladet.

This may be a matter of “tough times” for those caught in the p.c. wringer. They are obliged to keep silence about the obvious because in the EUSSR statistics can be deemed “racist” if they don’t line up with the current doctrine.

Unless a scientist is permitted to look at all the data, what she’s doing isn’t really science.

Sweden blocked Saturday European Union plans to stop divorcing couples from fighting over which EU court to legally settle their separation in.

EU Justice Commissioner Franco Frattini said it was “mainly Sweden opposing” the move, out of concern that the laws of other nations would not provide the same protection to the most vulnerable partners in a divorce.

“Now there is what we call unfortunately this growing phenomenon of foreign shopping. People can choose the applicable law and the judge,” Frattini told reporters in Slovenia after talks between EU justice ministers.

“This is, frankly speaking, a source of legal uncertainty,” he said.

Sweden endeavours to expedite divorces as quickly as possible, while the process can take far longer in other nations, with some demanding a period of separation before any court divorce can begin.

Malta does not recognize the right to divorce at all.

Complications can also arise in marriages between homosexuals, which are only recognized in some of the 27 EU nations.

Complications?? In a collective?? Nah…No individual state cultural customs here; of course not. We are one big happy Union. These aren’t bugs in the Constitution, folks, they’re features…which we plan to outlaw.

Witch Burning Part of the Festivities

Nordman, an ethnopop duo and regular in the Melodifestivalen competition, plans the witch-burning as part of its set in the Karlskrona heats on March 1st. In the act, a woman will play a witch being forced onto a fire and burned alive.

Swedish Girl Falls to Her Death From 4th Floor Apartment

A 17-year old girl has died from injuries sustained following a fall from her fourth floor apartment in the Småland town of Eksjö.

The girl was found on the ground by her parents outside the apartment building around eleven o’clock Sunday morning. They had gone to look for her when she didn’t show up for work.

Police are not sure if the girl fell, jumped, or was pushed.

“There is no obvious suspicion of foul play at this time, although we are trying to build a picture of what has happened by talking to relatives and neighbors,” said Jonsson.

Don’t you wonder what her ethnicity is?

This brings us full circle back to the story about the mystifying increase in “suicides” among women in Sweden… perplexing statistics indeed, especially if you keep your politically correct blinders on at all times, even in the shower. Never can tell what you might glimpse otherwise.

Finally, there is this bit of black humor which actually has a speck of brutal truth:

Stand Back or We’ll Shoot

Now who could those masked men have been? And what Swede would ever carry a gun??

There’s a hint in the story (see if you can find Waldo here):

The bank had not yet opened for business when the thieves drove a car through the bank’s main entrance.

Approximately twenty employees were present at the time, but none were injured.

One member of the management team was in the bank at the time.

“I heard a crashing sound and saw a car drive straight through the main doors. I understood that it wasn’t just a regular customer and rushed over to the police station, which is about ten metres away from here,” he told TT.

One witness was on her way to have her hair cut when she saw the robbers leaving the bank.

“I saw four masked robbers running out of the bank and screaming at each other. All of them were carrying sub-machine guns and some of them were speaking in broken Swedish.

“They threatened people who were standing in the square, saying: ‘Stand back or we’ll shoot’. I got the feeling they wouldn’t hesitate to start shooting,” she told TT.

What do you want to bet they were American tourists from Texas who’d run out of spending money. Vacations are so expensive.

9 thoughts on “When Does Farce Become Tragedy?”