I intend to write a text called “Ten Reasons to Get Rid of the European Union” This text will be written with me as editor and contributor, but not necessarily sole writer. I will post some ideas here which can be expanded upon by blog readers. I will then post a second, more elaborate draft, make some changes to that, and then post the final version. It is my intention that this text should be translated into major European languages and be republished or reprinted in various EU countries. If you post comments here, you thus give your permission to allow your writings to be incorporated into this text and republished elsewhere.

The proponents of the European Union claim that it is a “peace project.” But the EU is not about peace, it is about war: A demographic and cultural war waged against an entire continent, from the Black Sea to the North Sea, in order to destroy European nation states and build an empire run by self-appointed and unaccountable bureaucrats. This is supported by national politicians in order to enhance their personal power, by creating a larger political entity than their individual nation states and by ridding themselves of the constraints of a democratic society. The EU thus corrupts national political elites into betraying the people they are supposed to serve and protect.

At a national level when a minister wants to get something done, he or she must have the backing of the prime minister, must have the agreement of the minister for finance if it means spending money, and above all must have majority support in the national parliament, and implicitly amongst voters in the country. Shift the policy area in question to the supranational level of Brussels however, where laws are made primarily by the 27-member Council of Ministers, and the minister in question becomes a member of an oligarchy, a committee of lawmakers, the most powerful in history, making laws for 500 million Europeans, and irremovable as a group regardless of what it does. National parliaments and citizens lose power with every EU treaty, for they no longer have the final say in the policy areas concerned. Individual ministers on the other hand obtain an intoxicating increase in personal power, as they are transformed from members of the executive arm of government at national level, subordinate to a national legislature, into EU-wide legislators at the supranational.

EU ministers see themselves as political architects of a superpower in the making. They can also free themselves from scrutiny of their actions by elected national parliaments. According to Coughlan, EU integration represents “a gradual coup by government executives against legislatures, and by politicians against the citizens who elect them.” This process is now sucking the reality of power from “traditional government institutions, while leaving these still formally intact. They still keep their old names — parliament, government, supreme court — so that their citizens do not get too alarmed, but their classical functions have been transformed.”

The European Union is basically an attempt by the elites in European nation states to cooperate on usurping power, bypassing and abolishing the democratic system, a slow-motion coup d’état. Ideas such as “promoting peace” or “promoting free trade” are used as a pretext for this, a bone thrown to fool the gullible masses and veil what is essentially a naked power grab.

The EU is deliberately destroying the cultural traditions of member states by flooding them with non-European immigrants and eradicating native traditions. This is a gross violation of the rights of the indigenous peoples across an entire continent. Forcing native Germans, Brits, Italians, Dutch, Greeks, Swedes or others to fund their own colonization, to suffer abuse and violence in their own countries and watch as their heritage gets extinguished is evil, not tolerant. Native Europeans are taught that we should be grateful for the cultural traditions Pakistanis, Iraqis or Nigerians bring to our countries. We are also told that we “don’t have a culture.” This is an insult to thousands of years of Greco-Roman, Judeo-Christian, Germanic, Celtic and Slavic history. Europe has one of the richest cultural and artistic traditions on the planet. To replace this with sharia barbarism is not just a crime against Europe, it is a crime against humanity.

The European Union has created a borderless Europe from Greece to France and from Romania to Spain and Portugal, yet the citizens of these countries still pay the vast majority of their taxes to nation states whose borders are no longer upheld. It is ridiculous to pay up to half of your income to an entity that no longer has any semblance of control with its own territory. Unless national borders are reestablished, the citizens of all EU member states no longer have any obligation to pay taxes. We do, however, have the right to arm ourselves. As the authorities from Berlin via Amsterdam to London and Rome fail spectacularly to uphold law and order, citizens have not just the right, but the duty to arm themselves in order to protect their property and the lives of their loved ones.

The European Union cannot be anything but anti-liberty because it concentrates far too much power in a centralized system that is almost impossible for outsiders to understand. As the Austrian economist Friedrich Hayek warned in The Road to Serfdom:
– – – – – – – – –

To imagine that the economic life of a vast area comprising many different people can be directed or planned by democratic procedure betrays a complete lack of awareness of the problems such planning would raise. Planning on an international scale, even more than is true on a national scale, cannot be anything but a naked rule of force, an imposition by a small group on all the rest of that sort of standard and employment which the planners think suitable for the rest.

We shall not rebuild civilisation on the large scale. It is no accident that on the whole there was more beauty and decency to be found in the life of the small peoples, and that among the large ones there was more happiness and content in proportion as they had avoided the deadly blight of centralisation. Least of all shall we preserve democracy or foster its growth if all the power and most of the decisions rest with an organisation far too big for the common man to survey or comprehend. Nowhere has democracy ever worked well without a great measure of local self-government, providing a school of political training for the people at large as much as for their future leaders. It is only where responsibility can be learnt and practised in affairs with which most people are familiar, where it is awareness of one’s neighbour rather than some theoretical knowledge of the needs of other people which guides action, that the ordinary man can take a real part in public affairs because they concern the world he knows. Where the scope of the political measures become so large that the necessary knowledge is almost exclusively possessed by the bureaucracy, the creative impulses of the private person must flag.

The European Union is deeply flawed in its basic construction, and cannot function as anything other than an increasingly totalitarian pan-European dictatorship, run by a self-appointed oligarchy. Indeed, there is reason to fear that it was specifically designed that way. There cannot be a European democracy because there is no European demos, no European “nation” with a shared sense of pre-political loyalty. Moreover, power in the EU is concentrated heavily in institutions that are not just above the formal restraints of public consent, but also above the informal restraints of public scrutiny and insight. In short: The EU authorities can do more or less whatever they want to, as they do in relations to the Arab and Islamic world. 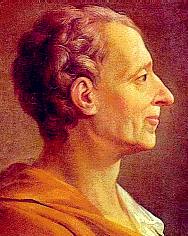 We should study the work of the great eighteenth century French thinker Charles Montesquieu, who admired the British political system. He advocated that the executive, legislative, and judicial branches of government should be assigned to different bodies, where each of them would not be powerful enough to impose its will on society. This is because “constant experience shows us that every man invested with power is apt to abuse it, and to carry his authority as far as it will go.” This separation of powers is almost totally absent in the European Union, where there is weak to non-existent separation between the legislative, the executive and indeed the judicial branches, and where all of them function without the consent of the public. In short, a small number of people can draft and implement laws without consulting the people, and these take precedence over the laws passed by elected assemblies. This is a blueprint for a dictatorship.

In 2007, former German president Roman Herzog warned that parliamentary democracy was under threat from the EU. Between 1999 and 2004, 84 percent of the legal acts in Germany — and the majority in all EU member states — stemmed from Brussels. According to Herzog, “EU policies suffer to an alarming degree from a lack of democracy and a de facto suspension of the separation of powers.” Despite this, the EU was largely a non-issue during the 2005 German elections. One gets the feeling that the real issues of substance are not subject to public debate. National elections are becoming an increasingly empty ritual. The important issues have already been settled beforehand behind closed doors. Free citizens should obey laws that are passed with their consent and with the best interests of their nation and people in mind. Most of the laws across the European Union are now not passed by elected national representatives, but by unaccountable EU bureaucrats. As such, the citizens of these nations no longer have any obligation to obey these laws.

As Montesquieu warned, “When the legislative and executive powers are united in the same person, or in the same body of magistrates, there can be no liberty; because apprehensions may arise, lest the same monarch or senate should enact tyrannical laws, to execute them in a tyrannical manner.” He also stated that “Useless laws weaken the necessary laws.” The problem with the EU is not just the content of laws, but their volume. Law-abiding citizens are being turned into criminals by laws regulating speech and behavior, while real criminals rule the streets in our cities. This situation will either lead to a police state, to a total breakdown in law and order, or both.