Our Austrian correspondent ESW sends her translation of an article from the website “Die Jüdische” (very roughly translated as “Everything Jewish”) concerning the recent demonstration in Vienna by a Hamas-supporting Austrian Muslim organization. 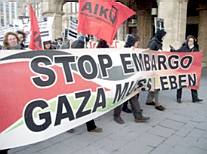 If this had been a demonstration organized by racist and terrorist Hamas, attended by the Liga Kultur [according to its website “an association to further integration and cultural exchange”, in the name of Allah, of course] and the Gesellschaft für Österreichisch-Arabische Beziehungen [Society for Austro-Arab Relations] as well as by anti-imperialist sects sympathizing with Holocaust deniers, this would not have been worth a single comment.

But because the Austrian Muslim Association (IGGiÖ) staged this demonstration — “Keep Gaza Alive” — on Saturday afternoon [January 26, 2008], a comment is in fact called for, especially in light of the fact that it was unsuccessful enough for the mainstream media to completely ignore it. 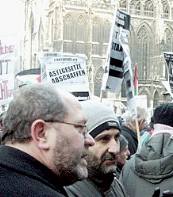 Why does the IGGiÖ choose to publicize a “peace demonstration” with the slogan “Keep Gaza Alive” when the entire world is witness to thousands of Gazans flooding into Egypt buying everything from food to camels? The IGGiÖ obviously does not care about the people in Gaza; they care more about supporting their like-minded and racist Hamas brothers.

The Austrian Muslim Association pretends moderation, yet it shows its sympathies with the racist group Hamas. IGGiÖ’s leaders are therefore — despite all the denials — either members of the Muslim Brotherhood, or at least close to them. Many Austrians are unaware of the fact that Hamas emerged out of the Egyptian Muslim Brotherhood.
– – – – – – – – –
It is beyond comprehension that the Austrian Muslim Association, although democratically not legitimized, has been accepted as the sole representative of Muslims in Austria. It is probably no coincidence that internationally wanted fundraisers were put on invitation lists by the IGGiÖ for iftar dinners sponsored by the Austrian President and the mayor of Vienna.

One of the Austrian Muslim Association’s hypocritical claims is “putting pressure on Israel in order to end military attacks on the Gaza strip immediately”. These men are mixing up cause and effect, of course uncoincidentally, because if the Hamas stopped collectively penalizing Israeli civilians in Sderot and other Israeli towns, there would be no Israeli attacks on terrorists in Gaza.

The Social Democrats in Vienna have published a flyer with the following message: “Vienna is safe from religious and social conflicts because they are not dealt with in a violent way, but rather in a democratic, civilized way, by adhering to the rule of law.”

This would be an advantage for the Gazans if the Hamas had not decided to use force and violence to reach obscure goals. If Hamas really were interested in peace and respect for human rights, which is continuously repeated by sympathizers of Hamas within the IGGiÖ, such as Omar Al-Rawi, member of the Social Democrats in the Vienna city council, then Hamas would grant immediate access by the Red Cross to Gilad Shalit and cease their rocket attacks.

After the ominous anti-Islamic attacks by Susanne Winter in Graz, the Austrian Muslim Association and Omar Al-Rawi were celebrated as those who prevented one of the many Middle East conflicts from coming to Austria. Admittedly, Susanne Winter’s remarks made objective criticism against the IGGiÖ very difficult.

However, by attending and promoting the demonstration in favor of the destructive policies of Hamas, the Austrian Muslim Association has proved the opposite, and that they are even prepared to cooperate with discredited anti-imperialistic sects.

2 thoughts on “Sympathy for Hamas”