Intolerant Tolerance is the result of fifty years of socialism at work. Don’t forget: there isn’t that much difference between communism, socialism, or anarchism. They all work towards the same goal, only differing in how to achieve it. Socialists prefer evolution, communists revolution, and anarchists anarchism.

Just about everything debatable is changed into a political subject. Preferably black and white, preventing any reasonable compromise. Anyone not agreeing with our progressive brethren is, by definition, a Nazi.

What they forget is that this works both ways. The Iron Curtain didn’t collapse because Gorbachev lifted it, but because the East Germans voted with their feet. Forty years of socialism went completely down the drain. That’s really bad, if you happen to be one of those never-tiring workers for peace, progress, and brotherhood. Building and maintaining a barbed wire fence with minefields and machine guns cost money, you know. It’s even worse if you realize that the people themselves rejected socialism. The very people it was designed for.

This will likely happen in the West as well. Socialism had its time. It has been judged by the people, and is found wanting.

The world is getting crazier by the day: fanatical tree-huggers now launch an initiative to forbid holiday flights within Europe. North Europeans should not fly to Spain for their holidays. Very bad for the environment, you know.

It isn’t bad to fly all the way to Bali to debate this issue, though.

Since the same idiots also fight against holidays by coach, for the same reasons, people are left with no alternative. A clever socialist government simply adds a bit more “green” tax. That is something the common man will accept. But canceling his holiday? Not very likely. He won’t say much, just take a coach to the nearest airport in a neighboring country and be done with it.

Would a compromise be possible? Of course. In a tolerant society, most certainly. All the more pity we don’t live in one. Every compromise, no matter how reasonable, is swept from the table. Nothing but the ultimate victory and the unconditional surrender matters!

In all countries where a public smoking ban was introduced, bars and restaurants lost at least 25% of their gross income. Something not many small businesses can afford, if only because of the excessive tax burden they have to carry already. Not in the long run. In Europe where smoking bans have been introduced, restaurants complain that it seriously affects their business directly (smokers don’t feel like dining anymore) and indirectly (if they have to dine, they skip coffee and dessert).

What would be a reasonable compromise? Air conditioning. It’s really that simple. Install a good air conditioning system in your premises, maybe with an extra ventilation unit, and the problem is solved. “No, it is not. We do not want to smell the merest whiff of smoke, we don’t want to see anyone smoking even if we cannot smell it. Such is our right!” Thus, the anti-smoking lobby. When one takes a position like that, compromises aren’t possible anymore.

Schiphol Airport has — until the first of June this year — a very good compromise: one cannot smoke in the waiting lounges, but one can in coffee shops, bars, and restaurants. In principle, this should satisfy everyone. While waiting in a lounge, one isn’t bothered by smokers. Should you fancy a cup of coffee the restaurants are big enough to accommodate both. Since the anti-smoking lobby is winning, they won’t settle for something reasonable like that. Therefore, smoking will be banned on Schiphol as of 1 June 2008, when the anti-smoking ban becomes effective in the Netherlands. 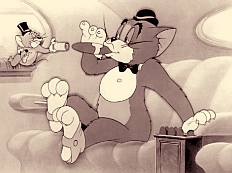 Now, this intolerant tolerance of progressive thinkers also affect something as innocent as TV cartoons. The first Tom and Jerry or Tex Avery cartoons have been censored (yes, really censored) for years since the early 80’s because of perceived racism. Once in a while you see (part of) a stereotypical black maid with a thick Southern dialect doing a Tin Tin in Africa act. This is racism, and we cannot expose your children to that! You do not want that. Therefore, practically all broadcasters self-censor for political correctness. Not enough, though. Today we have to include the clips where Bugs, Tom and Jerry smoke. Now, all of them do not smoke. Not by habit. But in a running joke they might. A shot lasting less than five seconds might convince innocent children to start smoking, so these clips are censored today as well. Ever seen children pushing a piano out of the window? Or an anvil?
– – – – – – – – –
The same worried folks want to introduce legislation banning smoking in the open air in and around every place visited by children. Now, I am close to fifty and getting pretty bald. Anyone who thinks little children will pick me for a role model and start smoking should visit a doctor. One specialized in curing delusions, that is.

This intolerant attitude touches practically everything. Not only that, our progressive brethren have to bite deeper and deeper into it. Take the environment, for example:

Contrary to what you hear, the environment is doing much better than a generation ago. The jungles are expanding somewhat and many rare species are recovering. But that is not what you hear. No environmentalist will ever say: “Folks, we on the right track! The environment is slowly recovering, thanks to your efforts and sacrifices. We aren’t there yet, but it’s getting better!”

Of course not. It would rob them of their bread and butter. Therefore, the environment is going down the drain, no matter what.

To get back to smoking once more: I read in a Dutch anti-smoking article the following figure: about 95% of the male population smoked during the 50s and 60’s, and that figure dropped massively to less than 17% now. This is propaganda pure and simple. Figures like 95% you find only when nations like Austria decide to merge into their neighbor or to show how well loved Kim II of North Korea is. Even Castro is smarter than that. The real figure is for the 50-60’s about 30 to 35%. And today about 20-25%.

But…. what do we suddenly see? All those (expensive!) anti smoking campaigns didn’t do zip! All those hours of indoctrination on primary schools have been wasted. If the percentage dropped in forty years of relentless campaigning from 33% to around 23% one cannot avoid that conclusion.

The only thing that helped (somewhat) was raising the prices of tobacco. Raising taxes is something any government adores to do. So they financially supported anti-smoking groups to vilify smokers, to justify substantial annual tax raises. As it didn’t help much, they gave a bit more money, so they could raise the tobacco tax revenue even more. Only that worked. To some extent, that is. For the price of a pack of cigarettes in the 1970 was 1 guilder, and today it is about 10 guilders. Even now a lot of people still smoke. (Don’t forget other substances are also used and abused, and those substances are far more expensive and dangerous to one’s health than tobacco.)

Anything else, including highly aggressive campaigns, complete banning of any tobacco advertisements, or inducing fear (by printing graphic pictures on packages) didn’t influence the population very much. In other words: forty years of tremendous efforts and money are basically thrown down the drain. A 10% drop over three generations isn’t really that impressive.

We see today exactly the same attitude with regard to other problems. Problems that could easily be solved by common sense and reasonable compromise. In European countries Muslims form small but vocal communities. The general population resents the efforts of their governments to sweep all the related problems — such as lack of integration, no will to form part of the community, excessive crime rates amongst minorities — under the carpet. Debating is no longer possible, for anyone not toeing the official line is vilified as Islamophobic or neo-Nazi.

Fortunately, there is a bit of hope. Today we have the Internet. Plenty of bloggers who accurately follow public opinion, and publish it. What could an average citizen do in the past? Not a lot. He could write a letter to a newspaper. But today without a lot of effort that same citizen can see in the blink of an eye how many people share his opinion.

We also know that the attention span and memory of the general public is short. But bloggers and the Internet changed that. Our governments will likely change for the better, as sweeping unwanted sentiments under the carpet simply doesn’t work anymore. It’s just a matter of time before it will show in electoral results.