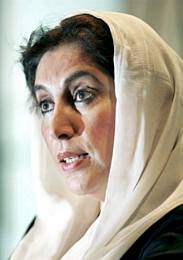 As everyone knows by now, the former (and aspiring) prime minister of Pakistan, Benazir Bhutto, was assassinated earlier today in Rawalpindi.

I claim no expertise in the internal political affairs of Pakistan. I can sense trouble ahead for South Asia and the rest of the world, but have no idea what form it will take. Given Pakistan’s status as the guardian of the “Islamic Bomb”, any form of trouble that ensues is likely to be lethal and widespread.

Is Ms. Bhutto the 21st century’s equivalent of Archduke Franz Ferdinand of Austria-Hungary? Is it possible that something equally wicked this way comes?

Here’s an open thread for readers to offer their assessments of the situation.

55 thoughts on “The Future Without Benazir Bhutto”