UPDATE: I have been accused of cropping the small image of the black rat out of a larger image. I did nothing of the sort.

I obtained this small rat image here at the Vlaamse Jongeren Westland (VJW) website, using the link provided by ProFlandria and the Flemish CVF team. I was totally unaware of the image posted today at Little Green Footballs. All the cropping must have been done by VJW.

Important: VJW has nothing whatsoever to do with Vlaams Belang, and there is an ample public record to support this fact.

I will make this update, along with a demand for a retraction and correction from Charles Johnson, into a separate post.

You don’t want to read this post. No, really: I mean it.

I’m as sick of all this crap as you are. I wish it were over, but we’re not quite done.

But I have to anyway. It’s a nasty job, but somebody has to do it. I’m the Boy Scout who drew latrine duty today. Time to roll up my sleeves, hold my nose, grab a mop, and get down to it. We did one potato, two potato, three potato, four, and the potato stopped at me. I’m it.

An unfair and baseless smear job has been mounted against Gates of Vienna, Vlaams Belang, the Center for Vigilant Freedom, and Counterjihad Brussels 2007. The allegations must not be allowed to stand.

As I mentioned previously, when accusations like this are not refuted, the smear itself becomes the public record on the issue.

All of the allegations have to be debunked. Gates of Vienna and CVF have been doing due diligence for the past six weeks, and the debunking is almost done.

But there’s a little bit more left to do.

Rather than this, I suggest reading about something more interesting and important, such as Hillary’s pantsuits or John Edwards’ hair.

You don’t want to read this post, and you’re more than welcome to skip it.

But it has to be here.

The “Flemish White Power Rat” is one of the graphical examples that have been used to smear Vlaams Belang. The argument that the black rat is a white supremacist symbol derives mainly from the Celtic Cross — gasp! that cross again! — found on the armband of the rat in some of the cartoons.

Identifying the black rat as a Flemish white power symbol relies on the flimsiest of associations. The black rat was created by a Walloon, not a Fleming. The character has been used by a variety of anti-establishment Belgian youth organizations, both Flemish and Wallonian, mainly from the patriotic Right but grading into the anarchists.

Bearing all this in mind, I asked ProFlandria to head a Flemish team and research the White Power Black Rat for Gates of Vienna. Here’s his report:

Having placed the Celtic Cross phenomenon in its proper context with respect to the Flemish movement, the second — and in my opinion, much easier — issue is that of the cartoon rat that is variously shown in Flemish nationalist publications and websites. The rat wears a Celtic Cross/Odin’s Cross, which is probably why it raises so much fear of “neo-Nazis”. If we consider the cross issue as properly adjudicated, the remaining cartoon animal does not appear to be much of an issue. The only remaining factors in play are the rat, and the contents of any material it appears to be associated with.

One of the “offending” organizations that uses the rat/Celtic Cross motif is Westland. Their website helpfully provides an explanation of the symbolic significance of black rat so we don’t have to resort to mind-reading:

The black rat has been used as a symbol of right-wing revolutionary nationalism for the past few decennia. It really symbolizes indifference towards criticism, rules of civility [and conduct],… which are being foisted upon us from the Left and other establishment lackeys. The insult of “black rat” was adopted as a badge of honor and adopted as a political symbol. In Flanders several organizations use(d) the black rat in their symbolism: VMO [Vlaamse Militanten Orde], NSV, NJSV, VJM,… In other countries this symbol has a longer pedigree. 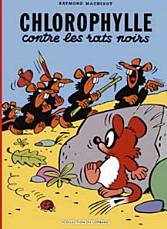 The black rat as representative of militant radical nationalism was first used by French students of Groupe Union et Defense (GUD). From there it spread through the Latin world (especially in the Italian MSI and its youth organizations), but also to Flanders, among others. The drawings are based on the comic ‘Chlorophylle contre les rats noirs’ [Chlorophylle against the black rats] which appeared in 1956, courtesy of the Walloon author Macherot. In the story Chlorophylle battles the black rats who are led by their king Anthracite. Although the vegetarian dormouse Chlorophylle represents the “good guys” and champions individualism, Anthracite gradually steals the show and he emerges to be unlike a stereotypical bad guy. While Chlorophylle becomes more and more annoying, the cultivated Anthracite displays ever more human characteristics, combined with jovial cynicism and slyness. As a symbol, the bad black rat with its obstinate [not sure, but close — translator] humor has contributed to an attitude which combines verbal aggression, determination, humorous nostalgia [?], pride, and healthy provocation.

The original creator of the cartoon rat, Macherot, is “a master in poetic and satirical animal comics, as can be seen in both his ‘Chlorophylle’ and ‘Sibylline’ series. […] Originally, Raymond Macherot focused on a career in journalism and painting, but he soon started illustrating for financial reasons. […] Macherot’s actual comics career started in 1953, when he joined the Tintin magazine and the art studios of Lombard publishers. […] A year later, he created his first and best known animal series, ‘Chlorophylle et Minimum’. Macherot drew the series until 1963, commenting on many social en political issues through the view of the rodents Chlorophylle and Minimum and their continuing problems with vicious gangs of rats and ferrets.”

Even though Macherot’s rat is undoubtedly the villain of his stories, there is nothing to link the image to “white power” or “nazism”. Several nationalistic youth organizations did adopt the rat motif as “mascot”, but they did so because of other characteristics closely associated with anarchy. That rebellious adolescents, who spent their childhood reading these comics, might pick a counter-hero from these comics as a readily identifiable symbol to represent their “non-conformity” should hardly be surprising.

Another organization which uses the rat (specifically in its magazine) is Vlaams Belang Jongeren. The rat, complete with Celtic Cross armband, heads a column by a comics critic.

In one column (click on the .pdf icon), the critic evaluates the work and background of Dutch comic writer, cartoonist, and novelist Marten Toonder. He spends a good part of the article discussing the artist’s ruse of using two film studios provided by the German occupation regime during World War Two to provide shelter to fugitives, and to provide resistance personnel and illegal publications such as “Parool” and “Vrij Nederland” with counterfeit passports, stamps, signatures, letterhead etc. He had even cajoled the Germans into exempting his “firm” from the usual deportations of skilled workers, and even to allow him to hire blacklisted people because of the highly specialized nature of his work. In the end, neither studio would ever produce any film material whatsoever. The article overall is very positive on Toonder. In taking pains to point out the artist’s activities against the Nazi occupiers, the critic shows his admiration for those characteristics attributed to the “nationalist” Westland rat: subversion, radicalism, and nationalism. The author of the article therefore appears to identify “his” rat’s characteristics with the actions of the subject whose passing he marks “Rebellion” here would be in the praiseworthy sense, as rebellion against totalitarian oppression.

In an older article, the same critic’s rat heads a column on… the Smurfs. The critic spends the entire article explaining the Smurfs and their environment as an allegory on Communism. Some of the analogies require a huge leap of faith to see what the columnist “sees” in specific characters. Elegance aside, however, his portrayal of this fictitious world as a communist parable isn’t written in a way that endears either one. Moreover, the enemy of these unlikeable characters — a good guy — is something of a Jewish caricature, and the columnist alludes to the possible religious aspect of his faithful sidekick. If there is “white power” theory in any of this, it’s too subtle for me to notice.

In conclusion, “white power” and “Nazism” do not appear in association with the cartoon rat. Furthermore, the way the VBJ comics critic used the rat as his “mascot” while eulogizing an artist who worked to resist the real Nazis in one article, and while pillorying Communism in another, makes it clear that rebellion against submissive conformism is his creed.

As you can see, the black rat has been adopted as a generalized symbol of youthful anti-establishment rebellion, used mostly — but not entirely — by patriotic groups, and not as a white supremacist symbol.

In addition, you’ll notice also that the final illustration shown above is used for VJW, the “Youth of West Flanders”, which has been erroneously identified as being a part of Vlaams Belang, which it most assuredly is not.

Thus, the significance of the rat as a supposed “neo-Nazi” symbol depends entirely upon the cross on its armband. The the identification of Celtic Cross with “White Power” has already been debunked.

So the rat has been disposed of, and our debunking of the smears against Vlaams Belang has finally reached its conclusion.

The remaining arguments by VB’s enemies can be summarized as follows:

The Celtic Cross. Also the Cross. And then there’s the Cross, and also Odin’s Cross. And don’t forget the Cross!

This, plus two words spoken by Filip Dewinter in an interview, and his stated preference for his daughter’s choice of a future husband, are all that the attackers have. There isn’t anything else.

You’d have to add two cups of cornstarch to this mixture to raise it to the level of Pretty Thin Gruel.

This completes our detailed refutation of all the allegations against Sverigedemokraterna and Vlaams Belang used to discredit Counterjihad Brussels 2007.

I’ll be writing a summary post or two to wrap up the whole sordid affair, and then we can finally do something else.

We’re almost ready to Move On.

To coin a phrase.

A special thanks is due to ProFlandria and the Flemish CVF team for their thorough, exhaustive, and professional work in researching the Celtic Cross and the Black Rat. We couldn’t have done it without their help.

50 thoughts on “That Fascist Black Rat”