Courtesy of Lars Vilks: the Prophet wishes you a Merry Christmas! 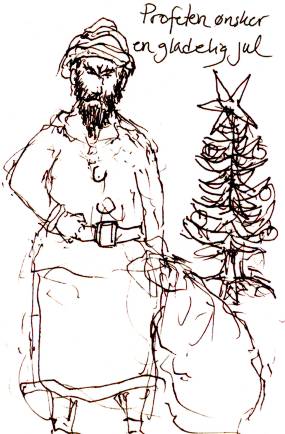 We now have his greeting in three languages: the title of this post is in Swedish, and the card itself is in Danish (“Profeten ønsker en glædelig jul”). If any commenter wants to add a version in his own language, it will be most welcome.

Some good news… I live in Sweden and was listening to a radio talk show this morning about religion. Of course there was an idiot woman who called in and spoke about how Islam and Christianity practically are the same thing and both of course based in love.

Nothing, out of the ordinary, right?

HOWEVER, then another caller called in and truly lectured the talk show host about Islam and refuted all the previous arguments. It was fantastic moment to hear him speak uninterrupted for probably ten minutes about why Muhammad and Islam is nothing like Christianity and how the root for Islamic violence is based in the Quran.

I was so happy to have heard this, because:

My dad and I stood with the biggest grins on our faces as the man spoke! Best present this Christmas!

Steen did some research and thinks he found the Swedish Radio program in question. Readers who can understand Swedish can check it out and report back with more details if they feel so inclined.

I have many holiday-related duties today, so posting will be light.