Finland is an exceptional country. Within living memory it fought successfully to avoid absorption by the USSR, and has a strong sense of national identity. As Western European nations go, Finland is — except for its Swedish minority — relatively ethnically homogeneous.

The Finns are prosperous, self-governing, respect human rights, and have no colonial past. Yet for some reason Finland has not escaped the pervasive sense of “white guilt” that has become the bane of Western Civilization over the last fifty years. As I reported a year ago, Finland is seeking more Third-World refugees, as if the example of its next door neighbor, Sweden, were not enough to deter it from such a foolhardy enterprise.

The reason for this ethnic death-wish may be found in a bureaucratic structure that exists entirely to promote, protect, and cater to ethnic minorities. After all, if you’re a bureaucrat, having more clients means increasing your power, right? So bring on the immigrants!

A few months ago I wrote about the Finnish Ombudsman for Minorities Mikko Puumalainen. Since then he has been succeeded in his position by Johanna Suurpää, who is pursuing her duties with the same zeal as her predecessor. According to YLE: 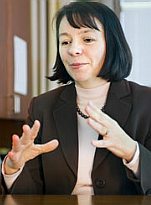 The Ombudsman for Minorities wants racialists operating on the internet to be brought to justice, writes the newspaper Kaleva.

The Ombudsman Johanna Suurpää says those disseminating material of a racialist nature must be brought before the courts in order to demonstrate its illegal character.

She told the newspaper the prevailing wisdom seemed to be that anything could be placed on the net. Suurpää did not estimate the actual number of racialist websites but said large amounts of material promoting racial prejudice was available. She felt a small but active group were responsible for most of it.

She admitted, though, it was difficult to intervene in all cases. In addition to the Ombudsman for Minorities, material of a racialist nature appearing on Finnish websites is also monitoring [sic] by the National Bureau of Investigation.

So if you blog in Finland, be warned: The Ombudswoman is watching you!

And who gets to define “racism” for the purposes of Finnish law? Is it Finland’s parliament, acting directly at the behest of the Finnish people? Or is it some subset of the unelected bureaucracy?

Ms. Suurpää uses the words “racialist” and “racist” interchangeably, at least in this translation, and the two words are often used to mean the same thing. But some people define racialism as “scientific racism”, that is, the assertion that the races of homo sapiens have distinguishable and measurable characteristics, including psychological traits, which set them apart from one another. “Popular racism”, on the other hand, means the common belief that one race is superior to the others.

Perhaps Ms. Suurpää means to include both definitions in her crusade against internet intolerance. But her stance highlights a recurring paradox: in order to fight racism one must be a racialist, since races have to be defined and distinguished from one another in order to protect designated victim groups. The Ombudsman has no choice; she must exercise racialism in order to do her job.

In other words, the cause of anti-racism perpetuates racism. It’s one of life’s bitter little ironies.