We have a commenter named Low and Slow. I never quite knew what to make of his nic, but being a lewd and lascivious type, I presumed that his choice was at least risqué. 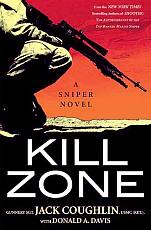 Turns out I was wrong, if the book Kill Zone is to be believed. The subtitle is: “a Sniper Novel,” and it’s written by retired Gunnery Sgt. Jack Coughlin with help from Donald A. Davis.

In his time, Gunny was a sniper himself; he’s written previously of his experiences in Shooter: the Autobiography of the Top-Ranked Marine Sniper. Of this first book, one reviewer says:

This is a very gripping book by a man who has a rather unusual job. The job he does is a job that when troops are deployed must be done. It is a job that we collectively as a country sanction. It is an interesting study of one man’s mind as he is doing this job. Whether you are hawk or dove it is a book that should be read as it more about human psychology than it is about war.

Of course by saying this I do not mean to say that the book is devoid of history as it is chock full of it.

It is also not just about killing but about skill and what it means to be skilled at something.

If you give this book a chance it will get you thinking.

A very challenging and multileveled book that is not so easy to dismiss (as much as many would perhaps like). It is very much worthy of your attention.

That’s by way of introducing you to the second book, which I was given to review. Both are published by St. Martin’s Press; Kill Zone having only come out this month.

There are differences in these books, however. For one thing, Kill Zone is fiction. For another, I surmise that we see less of the author in this second one, and more of the machinations of the plot.

While it is clunky in its execution ( to coin a word), Kill Zone presents an interesting thesis and invites you to explore it, too: what are the unintended results of outsourcing more and more of what we consider traditional military duty to mercenaries? Mercenaries are paid better, are not hemmed in by so many rules of engagement, and don’t have the same level of psychological investment in the outcome. How does that change things?
– – – – – – – – –
While there are some stilted parts in the story, and its characters are not well-developed (tending to wear white and black hats), it’s a fast-paced novel once past the initial chapter.

If you have someone who loves military adventure tales, they’ll enjoy this book. Definitely a guy book, though – probably St. Martin’s Press thought that the guy on this blog would be reviewing Kill Zone but since he’s up to his elbows in much bloodier cyberwars, it fell to me to do the review. And that gave me an unparalleled opportunity to sit around and read without feeling guilty.

I think this author will improve with time and the practice of his craft – the craft of writing, that is. It will be interesting to see what he does next, and if he pursues the problems that a global mercenary corporation presents for any nation’s foreign policy. If you read our own country’s history, there were mercenaries – including Indians – aplenty on both sides of the Revolutionary War and the one in 1812.

Meanwhile, I did learn what “low and slow” means…in Kill Zone the protagonist repeats that mantra to himself as he lies hidden, preparing to pick off his foes one at a time: “low and slow” – which is never really explained explicitly – seems to be the most successful method of bringing down whatever it is you are aiming at. Obviously, “slow” means don’t rush the shot, and “low” means aim for the body’s mass.

At least that’s what I got out of it.

Now, Low and Slow, email me (our address is on the sidebar) and I’ll send you the book, even if that’s not why you chose your nic.

If I don’t hear from you in a week or two, I’ll send the book on to Medical Mauser since he features an “ugly gun” every Sunday. One of the stars of the book is a sniper rifle called “Excalibur” and I know MM would love to read the many loving descriptions of this weapon. I, however, have gotten fond of his uglies, especially this one from July. It’s a friendly looking device; I don’t know why he has to be so hard on it – I call it the “orphan gun” because no one wants to claim it.

Besides, if you actually aimed The Orphan at anyone, they’d fall down and die laughing, saving you the expense of ammunition – not to mention court costs.