I saw that headline and immediately thought: “offensive Muslim art”?? What have we here —pictures of beheadings? Disobedient wives being beaten into submission? A few hangings perhaps? Or gay men being buried under a wall?

Hmm…that sounds offensive to me. Glad they removed those suckers.

But…the reality turned out to be a little more puly and Politikally Korrect than that:

The city museum of The Hague has decided not to include in an exhibition a work of art that may offend Muslims, it was reported on Monday.

The picture, made by Iranian artist Sooreh Hera, is entitled Adam and Ewald and shows two gay men wearing masks of the Muslim prophet Mohammed and his son-in-law Ali.

It is part of a photoseries the Gemeentemuseum has included in the 7up exhibition due to open on December 15.

However, he added he will not exhibit Adam and Ewald in the next few years because “certain people in our society might perceive it as offensive”.

Hera responded she was “disappointed” and added “apparently a Muslim minority decides what will be on display in the museum”. 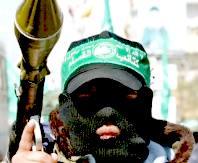 Oh, of course. “Certain people” might “perceive” it as offensive. Oh my…can’t have that. Why, those c.p.’s would be sulking and next thing you know they’d be refusing any more government handouts and maybe they’d decide to leave.

Or maybe – just speaking statistically about behavior here – they might burn the museum down and behead the curator and rape his children.

Poor Holland. Tolerant Holland. The universe is paying you back for all that wonderful, morally superior “tolerance.” She sent you zero-tolerance barbarians. See, She’s doing an experiment: what will it take for you to grow a spine, dear Netherlands?

You conquered the ocean and held it back. Now a flood of human beings is drowning everything you once were.

Weep for your children…though, of course, Ewald won’t be having any, but he no less deserves your sorrow. He is your child, too.

UNIVERSE TO HOLLAND: WHERE IS YOUR SPLEEN ??

[finis to a sad story]