It’s become evident that the West is going to do nothing about Iran’s imminent acquisition of nuclear weapons. The NIE simply supplies the fig leaf, a nice little rationale for a done deal.

Meanwhile, Europe is being rapidly Islamized. The EU and the USA pretend that there’s nothing going on, but the Muslims are well aware of what’s happening, and state their goals clearly.

And not just the Wahhabi Sunnis of the Muslim Brotherhood, but also the Shiite theocrats of Iran. According to AKI: 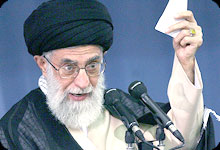 Europe will eventually become a Muslim continent, according to a representative of Iran’s supreme leader, Ayatollah Seyyed Ali Khamenei.

“In a dozen years, Europe will be an Islamic continent,” said Rasul Jalilzadeh on Friday as he was speaking to the basiji, a voluntary organisation in the capital Tehran.

Actually, the Basiji are a “volunteer” goon squad of Islamic thugs. Their mission is to rough up women who don’t wear the hijab and torture journalists in prison.

“The Islamisation of the European continent is imminent and this step favours the arrival of the Mahdi,” he said, referring to the 12th imam of Shiite Islam.

It’s important to remember what will portend the arrival of the Twelfth Imam: massive, violent chaos.

Shiites believe that the Imam Mahdi, who disappeared as an adolescent, will return to bring an end to chaos and bring universal justice.

Rasul Jalilzadeh believes that “the Islamisation of Europe is one of the consequences of the Islamic revolution in Iran” in that “the messages and values that this revolution has transmitted to the Europeans, to convince them “to abandon their current faiths and convert to Shiite Islam.”

Mr. Jalilzadeh is wrong about one thing: most Europeans already have abandoned their current faiths. The Shiites and the Sunnis are simply engaging in a little friendly competition to see which version of Islam will be the new European faith.

Just think about what this man is saying:

The people who believe this dangerous nonsense rule a country with a population of almost seventy million people, and they want to get their hands on nuclear weapons.

And we’re going to let them.

18 thoughts on “Europe Will be a Muslim Continent”