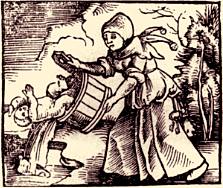 A discussion has emerged here in a couple of threads that touches on the sensitive issue of extreme measures as a response to the Great Jihad. People have strong feelings about this issue, and some see a choice between stark extremes: a harsh, no-holds-barred response on the one hand, and submissive capitulation on the other.

Zonka and whiskey_199 exchanged opinions on the issue last night. Whiskey_199 said this:

Zonka — my problem with your comment is that survival not principles are at stake. This is a common confusion among leftists.

SURVIVAL trumps all else.

If survival is all that matters and principles can just be thrown in the dump, then I suggest that we all convert to Islam, and be done with it!

Don’t like that solution? Then what are you fighting for besides your life?

And the real fights haven’t really begun yet, and still a lot of people are calling up the end-game scenarios, where we ditch all principles, ethics, morals, etc. and just go for pure bloodlust… If that is your commitment to freedom and democracy, then it is sad indeed!

I added my own two cents’ worth:

If survival were all that mattered, we’d have paid the stamp tax and never said a bad word about King George.

If survival were all that mattered, the plantation owners in Mississippi would have kept their slaves, and the mills in Massachusetts would have continued to receive their cheap cotton.

If survival were all that mattered, no hydrogen bombs would have been built and the Red Army would simply have strolled from the Elbe to the Bay of Biscay.

There are things worth dying for. Human beings have proved that time and time again.

We have our ideals. That what distinguishes us from the enemy.

The big question in this argument is: How many ideals are we willing to let go of in order to win the battle?

If the answer is “all of them”, then there’s no point in fighting in the first place.

There are additional reasons for steering the conversation away from such incendiary topics.

We keep this blog at the sufferance of Blogger, which is now a subsidiary of Google. The latter, in its infinite wisdom, has set up mechanisms through which alert readers can report violent, obscene, and hateful blogs, which Google may then choose to close down.

I know that we have lurkers here who are less than sympathetic to our cause, and who would relish the chance to do us harm. These are the people who maliciously subscribe me to lefty mailing lists and report Gates of Vienna to WebSense as a “social networking” site. I’m sure the same folks wouldn’t hesitate to turn us in to Blogger for violating our terms of agreement.

I value the free flow of ideas in the comments as much as you do. But I don’t know exactly what the limits are, and I don’t want to find out by having our blog pulled out from under us.

Please exercise discretion, tact, and indirection. If you must broach sensitive topics, consider carefully what you’re saying and follow the guidelines I have outlined previously. Judicious and temperate phrasing will do wonders to facilitate a broad-ranging discussion.

Zonka’s got the right idea.

73 thoughts on “Ditching Our Principles”