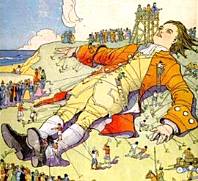 Nowadays, within the European Union, it’s no stretch to criminalize free speech. Under the draconian new legal guidelines issued by Brussels, virtually any Counterjihad writings can be cast as “inciting religious hatred” or “promoting racism”, or some other Orwellian classification. Speech is cast in these terms to render it doubleplus ungood, and therefore unutterable.

In contrast, laws in the United States must be bent into a pretzel to criminalize speech. However, CAIR and the Left have been busy in recent years teaching themselves how to bake pretzels.

It has long been the habit of the Left to elevate ordinary disagreement to the status of “slander”, “libel”, “harassment”, “hate speech”, and the like. Honest mistakes or misstatements are called “lies”. Following someone else’s writings closely and criticizing them is dubbed “stalking”.

Islamist groups have observed these techniques, picked them up, and adapted them for their own purposes.

This strategy — the gross escalation of language into absurd hyperbole — can be used to designate unwanted speech as a criminal act. Stalking, libel, slander, and harassment all have criminal legal implications in most countries. Authors are then intimidated not just by the threat of a lawsuit, but by the possibility of jail time and a criminal record.

The Left and the Islamists aren’t the only ones employing these tactics. The same methods have been used during intramural squabbles on the Right. As Dymphna noted in her post last night, the announced intention to post a transcript of a publicly available audio was called “blackmail” by the person who made the audio public in the first place.

Christine of Vigilant Freedom has detected a pattern in the attempts by the Left and the Islamists to criminalize free speech. She found and researched six examples of this strategy and posted them today at the CVF blog.

We’re now familiar with the pattern of attacks against free speech in online journalism and talk radio. This Autumn we have seen an escalation, sometimes from unexpected sources. The political goal, at least for the left and the Islamists, is to criminalize speech by equating any criticism of Islam with “hate speech,” and this so-called “hate speech” as unprotected incitement speech causing “hate crimes.”

Islamists and leftists routinely attack fact-based online journalism and analysis, as well as talk radio, as “incitement,” “hate speech,” “stalking,” “harassment,” “blackmail,” “threats” — labels associated with actual crimes. This highly loaded language — whether it comes from CAIR or from fellow bloggers — lowers the quality of public debate and creates a chilling effect on any online investigative journalism or analysis.

Recent attempts to silence Michael Savage, Joe Kaufman, students at the Universities of Wisconsin and Florida, the Gates of Vienna blog, the Stop The Madrassa Coalition in Brooklyn and others are all examples of labeling protected free speech as a crime or an incitement to violence. The Silencers may claim they are using the criminal labels metaphorically; but the potential chill factor on all journalists and activists is very real.

Her first example concerns “Stop the Madrassa”, an organization that is dedicated to opposing a state-funded Islamic public school in Brooklyn. STM is bucking the entire NYC establishment combined with CAIR on this issue:

The Stop The Madrassa Community Coalition has worked tirelessly to expose the extremist statements and affiliations of Dhabah Almontaser, the former principal of the Khalil Gibran International Academy in Brooklyn, New York. According to the New York Daily News, Almontaser recently “sued the city for allegedly violating her rights to free speech and due process by forcing her resignation in a lawsuit naming Mayor Bloomberg and [Deputy Mayor Dennis] Walcott as defendants.” This federal lawsuit specifically restated charges made by Almontaser as reported in the New York Times, that:

Members of the coalition stalked me wherever I went and verbally assaulted me with vicious anti-Arab and anti-Muslim comments.

The “coalition” exists primarily as a group of community residents, parents and teachers who are also careful online researchers, and Almontaser’s allegations that she was “stalked” and “verbally assaulted” are apparently based on their reporting of her actual statements reported in online articles. Note the devolution of language: research about someone becomes “stalking”; publishing that person’s actual statements and affiliations with radical Islamist groups such as CAIR, is equated to “verbal assault.”

In other words, Almontaser’s lawsuit against New York City, and her published statements, both apparently characterize ANY quotation of her prior public statements as a crime.

But the Stop The Madrassa Coalition won’t be silenced.

You can read more details on this issue in the CVF post.

In a minor but illuminating example of friendly fire in the blogosphere, the blogger “Dymphna” at Gates of Vienna was accused of “criminal” behavior — of “blackmail” and “making threats” — by another blogger, “Dr. Sanity”. Ironically, the “threat” was that Dymphna intended to post a transcript of audio that was already public, and to assess it against a code of blogger ethics — in other words, to post already public facts and perform analysis against a commonly accepted standard. Dymphna offered as an alternative to the posting a request for an apology and retraction, the entire communication made in a private email. Again ironically — and in what arguably may have been a series of journalistic errors — that email was made public by “Dr. Sanity” in a blog post, and then treated as if “Dymphna” had made it public herself. To her credit, Dymphna did post the transcript — and an analysis of the problems in online journalism posed by the entire incident.

Apart from what might be at best questionable journalistic behavior and mistakes at several points in the process by “Dr. Sanity,” the interesting behavior is her labeling of straightforward online journalism as a criminal act — “blackmail.” It shows just how contagious is this conflation of protected speech (in this case, reasonable and prudent online journalism) with some kind of alleged crime. Just because someone feels threatened, doesn’t mean someone else is being threatening.

At the University of Wisconsin-Milwaukee, last week the Muslim Students Association tried to prevent a speech by Walid Shoebat, by labeling his criticism of radical Islam as hate speech and claiming a threat of violence [emphasis is ours]:

The speaker of the event is Walid Shoebat, a well known addict of hate-speech. His writing and speeches have deliberately rotated around inciting Americans with fear of Muslims and Arabs, associating them with terrorism. The ramifications of allowing such hate-mongers to spread hate has been clearly driven [sic] in the physical attacks on Muslims, Arabs, or anyone with Middle-Eastern appearance following the events of September 11th.

The Muslims at UWM feel that their safety will be in danger if the above mentioned event takes place on the UWM campus. We ask the UWM Administration to cancel the event due to these circumstances for the safety and comfort of the students. We take such an event as a direct attack on us…

The MSA’s silencing efforts have failed, Shoebat will speak…

Number four concerns the groups that aired “Obsession” at the University of Florida:

Also this week, University of Florida administrators are attempting to silence two law students who showed the movie “Obsession” on November 13 and advertised it with a flyer stating “Radical Islam wants you dead.” A number of organizations sponsored the movie: Law School Republicans, Jewish Student Union, College Republicans, Gators for Israel and the Jewish Law Students Association. (Knowing that there’s a group called “Gators for Israel” makes the future a little sunnier…)

Given the endless threats of Death to America, Death to infidels, Death to Israel etc. from radical Islamists, the flyer’s wording strikes us as fact-based and admirably concise…

In response to further Muslim student complaints about the flyer, the University’s Vice

President for Student Affairs, Dr. Patricia Telles-Irvin sent an email to the 50,000 student body saying that the students’ flyer showed “offensive behavior” and demanding an apology for it. As one of the law student organizers say [pdf format], “The administration says that we owe an apology to the entire campus — for stating a fact.”

The fifth example is the recent effort mounted against Joe Kaufman for “inciting violence”:

Joe Kaufman, founder of Cairwatch and Americans Against Hate, organized a peaceful protest of the Islamic Circle of North America’s Family Day at the Six Flags Over Texas amusement park near Dallas. For background on the Islamic Circle of North America, see his article here at Front Page magazine. At the actual protest on October 14, 2007, approximately 10 people showed up, to stand peacefully with signs outside the entrance. According to the Militant Islam Monitor, quoting from the Dallas Star-Telegram:

“Islamic organizations in North Texas are seeking libel damages in a lawsuit against Joe Kaufman, leader of the Florida-based Americans Against Hate.[…]

[…]The lawsuit, filed Oct. 12, asked a judge to prohibit Kaufman from threatening, harming or inciting violence against anyone associated with the outing, in addition to libel damages, according to court records.

Area Islamic organizations were granted the temporary restraining order against Kaufman. They have also asked a judge to make a determination of libel against Kaufman…

Mr. Kaufman is a prime target for suppression, and is fighting these lawsuits. You can donate here.

Last, but not least, is Michael Savage:

CAIR has been attacking talk radio host Michael Savage for his criticism of radical Islam, using a coalition of far-left “interfaith” activists (including Hillary Clinton’s favorite, Michael Lerner of Tikkun). They’ve lobbied some of his advertisers to stop supporting his program, and they’re calling any advertisers who don’t leave racists and bigots…

Fortunately, Michael Savage is not a timid soul. He is suing the website that posts extensive clips of the audio from the show- for copyright violations!

The counter-suit strategy has the advantage of forcing CAIR and other adversaries to reveal their internal documents during the discovery process. If they want to avoid this, they drop their lawsuits. If not, we learn more about their inner workings. Either outcome demonstrates the advantages of an aggressive counterattack.

I’m no fan of Michael Savage; I find his style and tactics unpleasant. He’s just not my cup of tea. But, as in the Mikko Ellilä affair, an aggressive defense of his right to speak is an absolute necessity, regardless of the content of what he says.

I have no doubt that the same guns will turn in my direction eventually.

Not only that, Michael Savage and I are on the same side. But even if we weren’t — even if he were a protégé of Michael Moore — I’d go to bat for him.

These are the prerequisites for a successful Counterjihad.