Pope Benedict has come down on the side of people – as opposed to, say, the spotted owls and hairy newts so beloved of the Green movement.

He has also insisted that science, not dogma, inform the investigations into climate change. 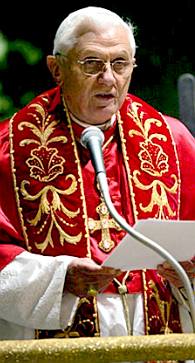 This announcement has not actually been given as a speech yet. It is the theme of the Pontiff’s yearly January 1st message. However, it was released ahead of time to coincide with UN climate change talks, which are taking place in Bali. For some reason they’ve chosen “the Indonesian holiday island” as their meeting place rather than, say, one of the fast-melting glaciers. Funny how that works with the U.N.

Here’s an excerpt of Benedict’s speech, “The Human Family, A Community of Peace” in The Daily Mail:

Humanity today is rightly concerned about the ecological balance of tomorrow,” he said…

“It is important for assessments in this regard to be carried out prudently, in dialogue with experts and people of wisdom, uninhibited by ideological pressure to draw hasty conclusions, and above all with the aim of reaching agreement on a model of sustainable development capable of ensuring the well-being of all while respecting environmental balances.

“If the protection of the environment involves costs, they should be justly distributed, taking due account of the different levels of development of various countries and the need for solidarity with future generations.”

In the spring, the Vatican hosted a conference on climate change that was welcomed by environmentalists.

But senior cardinals close to the Vatican have since expressed doubts about a movement which has been likened by critics to be just as dogmatic in its assumptions as any religion.

In October, the Australian Cardinal George Pell, the Archbishop of Sydney, caused an outcry when he noted that the atmospheric temperature of Mars had risen by 0.5 degrees celsius.

“The industrial-military complex up on Mars can’t be blamed for that,” he said in a criticism of Australian scientists who had claimed that carbon emissions would force temperatures on earth to rise by almost five degrees by 2070 unless drastic solutions were enforced.

Well, at least we know how frigid the relations between the Australian cardinal and the new government will be. Hint: put on your thermal jacket.

Meanwhile, the inmates from Oyster Bay are pulling their usual pouts and machinations at the meeting on Bali:

The climate-change stakes have just been raised a significant notch.

So far the United States, Japan, and several other governments have refused to accept language in a document being drafted at the Bali conference suggesting that industrialized nations consider cutting emissions by 25 percent to 40 percent by 2020.

They insist that setting specific targets for the deep reductions would limit the scope of future talks.

Translated, this means that the remaining hold-outs are sane and the inmates are going to make sure the refusers pay well for their sanity:

The EU challenge has launched new pressure on delegates from nearly 190 nations entering the final-hour talks in Bali. The Bali conference is aimed at launching negotiations for a successor to the Kyoto Protocol.

The European Union and others say the figures reflect the measures scientists say are needed to rein in global warming and head off predictions of rising sea levels, worsening floods and droughts, and the extinction of plant and animal species.

“This is the clear position of the EU. I do not know what we should talk about if there is no target.”

The US invited 16 other major economies, including European countries, Japan, China and India, to discuss a program of what are expected to be nationally determined, voluntary cutbacks in greenhouse gas emissions.

Needless to say, China and India are not included in the proposed new Henny-Penny climate rules. The gun is aimed at the U.S., as usual.

Envy sure is corrosive, but it’s not nearly so malignant as ignorant envy, which lies at the heart of all this holier-than-thou hypocrisy. So far this document continues as the Kyoto Joke.

How about first we fine all those countries who signed the Kyoto Haha and aren’t anywhere near reaching their goals, and then we talk about what the US is obliged to do.

For a different – and quite compelling – view, see this.