Update: There were problems with the links to the original cartoon page, so they have been replaced with links to a somewhat lower-resolution version of the same comic strip.

Most Gates of Vienna readers are familiar with the “Motoons”, the cartoons of Mohammed that were drawn by various Danish artists for Jyllands-Posten and caused a major international crisis almost two years ago. 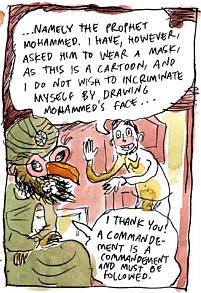 But few people outside of Finland have heard of the Finnish comic strip that featured Mohammed, or Ville Ranta, the artist who drew the strip. I was unaware of the story until KGS gave the country report for Finland at Counterjihad Brussels 2007. He mention Ville Ranta in his talk, and subsequently arranged for an interview with Gates of Vienna.

Mr. Ranta’s cartoon conversation with Mohammed — whom he depicted in a mask to avoid drawing a likeness of Mohammed — caused an uproar in Finland. His editor refused to withdraw the comic strip, and was fired as a result.

4 thoughts on “An Interview With Ville Ranta”