The conflict on the border between Iraq and Turkey is not confined to Anatolia and Mesopotamia. According to Aftenposten, violence has broken out between Turks and Kurds in Oslo and other Norwegian cities.

I can’t find any stories about this in English, but Tundra Tabloids (which tipped me to the story) has a report on it, and the blog Islam in Europe has posted a digest of the news stories, which is reproduced below: 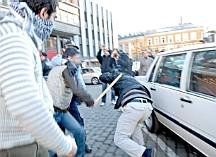 One man in the demonstration process was attacked by two counter-demonstrators. He was hit in the head by two people with clubs, such that one of the clubs broke. According to an Aftenposten photographer the men attacked for more than 10 seconds before police managed to separate them from each other.

Belle says that an ambulance was summoned but that he does not know how seriously injured the man was.

The demonstrations were related to Iraq giving permission to Turkey to strike against PKK guerrillas based in Northern Iraq.

6 thoughts on “Turks vs. Kurds in Oslo”