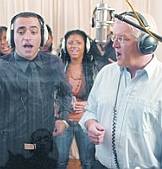 A scandal is brewing in Germany, although there’s not much about it to be found in the English-language media. News stories concerning the incident have appeared — for example, this one in The Daily Telegraph — but they only give a bare-bones description of the event. It’s an official press-release version, describing a feel-good Multicultural occasion when the German Foreign Minister Frank-Walter Steinmeier and Bernard Kouchner, his French counterpart, did a little off-key musical number in a recording studio with a Turkish-German pop singer.

Nice moment. “We are the World”. Music will bring us together. Etc., etc.

What these MSM stories won’t tell you is the background of the pop singer these two political bozos joined up with for their Terpsichorean moment. Muhabbet — he seems to have only a single name, like Cher, Sting, or Madonna — is not your average Turkish-German rap singer: he has this nasty little habit of promoting violent jihad in his songs.

I first became aware of this story a few days ago through the German blog Politically Incorrect:

“He met the right sound” rejoices the German governmental youth-magazine on the “integration song interpreted by German minister of foreign affairs Steinmeier together with his French colleague Kouchner and the Turkish singer Muhabbet accompanied by some young musicians — a song to promote an open and tolerant Germany. Fair enough, but subsequently it occurred that of all people Muhabbet has some other views about cultural openness and tolerance than intended by Steinmeier.

It should have been a public relations action during the talks between Germany and France about integration issues. Quite awkward though, the German TV midnight-news “Tagesschau” presented the film-maker Esther Schapira (…), who had produced an award winning documentation about the murder of Theo van Gogh by an Islamist. She said in front of the TV-cameras, Muhabbet had come towards her and a colleague of hers after the award winning ceremony and told them van Gogh would have been “lucky, he died so fast”. Muhabbet explained he would have imprisoned and tortured him in the basement first and added: “Ayaan Hirsi Ali has earned death too.”

You can see the Muhabbet video at Politically Incorrect.

This morning I received an email from LP, who had additional information on the Muhabbet-Steinmeier affair:

This is a massive scandal brewing in Germany, which has so far gone unnoticed in the Anglophone press and blogs.

On Nov. 12, German foreign minister Frank-Walter Steinmeier and his French equivalent Bernard Kouchner joined Turkish-German ethno-rap artist Muhabbet (23) in his studio to record a cheesy song about “Integration” and “Tolerance” and “Respect” and such. It’s silly enough, but not a big deal.

LP included another video clip of the event:

Muhabbet apparently is touted as some sort of integration wunderkind: He’s a UNICEF-representative for education, and a frontman for the anti-violence campaigns of the ministry for family and education. He flies on the minister’s plane and was dined by the chancellor, Angela Merkel

When Steinmeier’s publicity stunt made the news, the respected and recently decorated ARD-journalist Esther Schapira (ARD is the German BBC) and her co-producer Kamil Taylan remembered Muhabbet: They had met on Oct 20, when Schapira’s film “The day Theo von Gogh died” received the “Prix Europa”. After the ceremony, Muhabbet opined to Schapira and Taylan that he, Muhabbet, would tortured van Gogh in an cellar for days, before killing him. He also volunteered that he would do the same to Ayaan Hirsi Ali. Taylan (57) was about to strangle Muhabbet, when the latter’s manager intervened and tried to de-escalate. An email exchange, now on record, followed.

Esther Schapira went onto primetime TV news and told her story. First, Muhabbet denied the whole incident. Then he said he was misunderstood. Finally he floated a third version: I’ll translate some highlights:

…and so on and so on. Tons of it. And this is recent stuff. A YouTube search will quickly yield all sorts of world-dominatin’ heathen-killin’ fag-and-c**t-killin’ wolves, who also have a thing for God. The audience in the videos appears to interpret this as songs about the religio-nationalist Türkish organization “the Grey Wolves”, as they make clear by their hand signs.

Remember: This man is a UNICEF-representative for education, and a frontman for the anti-violence campaigns of the ministry for family and education. He flies on the minister’s plane and was dined by the chancellor.

Oh, and what does the Foreign Minister say now, he who sang with the guy? He asks the media for “more restraint and due care in investigation”, because Muhabbet “has always spoken out in favor of integration and against violence”.

And Muhabbet says: “I’m not violent or fundamentalist… where do these fears come from? My fans are totally relaxed… the single and video will be out next week.”

PI reports that Steinmeier is currently being evasive about the issue. Presumably he will move soon to angry denunciation of his detractors, followed by a long period of “no comment”. Then perhaps he will blame the incident on “insufficient research by my overworked staff” or something similar. Then more of the weaving and bobbing, calls for resignation, and so on…

Or maybe not. We’ll see.

8 thoughts on “Rappin’ With the Jihad”