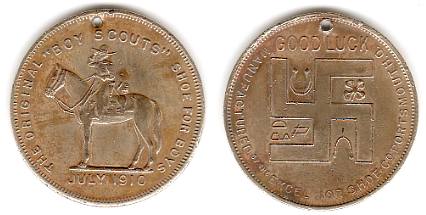 The photo above shows the obverse and reverse of an old Boy Scout souvenir coin, passed down to me by my father among his memorabilia. As you can see, the coin was actually a promotional item issued by the Excelsior Shoe Co. of Portsmouth, Ohio.

At last the racist and white supremacist nature of the Boy Scouts has been exposed! Everyone who has ever been a Boy Scout — from Franklin Delano Roosevelt through Gerald R. Ford to the future Baron Bodissey — has become tainted by the association with that foul symbol. Only a public repudiation of their past Nazi affiliations could ever begin to repair the reputations of those affected.

Actually, as we all know, until about 1930 the swastika was a perfectly respectable symbol. “Swastika” is the Sanskrit term for the design, and was picked up by the British in India and passed into common English usage. It was known as a tetragammadion (“four gammas”) by the Greeks, and as a fylfot (“many-foot”) in northern Europe.

The fylfot symbol is of indefinitely ancient provenance. It has been found in Scythian tombs on the Central Asian steppes, inscribed on grave goods that date from the third millennium B.C. Up until the early 20th century it was widely considered a good luck charm, and was painted on heraldic shields, used for insignia by the U.S. Army, and carried by early airplane pilots.

But, like the jersey number of a great football player, it has since been retired. Until the word “Nazi” is forgotten, the swastika can have only one meaning.

The same cannot be said of the Celtic Cross. Filip Dewinter, a leader of the Vlaams Belang party, has found himself in hot water due to his evident possession of a Celtic Cross. Those who are eager to smear him as a white supremacist and neo-Nazi are certain what it means to him.

But the Celtic Cross can still have other meanings, even in Flanders, where it can be found on gravestones in the cemeteries of the Great War.

Since every other charge leveled at Mr. Dewinter has proved to be bogus, the Celtic Cross looms large in the current attacks, but its significance to him is not known.

Belgium is currently in the midst of the largest constitutional crisis in its history, with Vlaams Belang and Filip Dewinter playing a pivotal role in the unfolding events. Answering the shrill cries of “neo-Nazi!” being flung at him from across the Atlantic is probably not high on the list of his priorities.

I advise you, Baron, in all good will, to FORGET Johnson, and deal with the tangible and factual words of Phillip Dewinter himself, who I heard give an excuse for ‘white europe’ which had it been uttered by Hillary, Carl Levin, John Conyers, or any of that ilk would have us all, both hysterically laughing, and ill.

You know him, why don’t you get HIM to see the error of HIS ways, and HIS symbols and HIS words instead, and repudiate such ideas NOT as a metaphor but as both wrong and politically impossible

I have had about a dozen people listen to Dewinter’s shire interview. None of them knew anything else (why would we know about flemish domestic issues), but what they heard. Every single person who has heard DeWinter has had the same reaction.

Except for knowing there was a fight going on and the edges of it, neither did I when I first heard it.

Dewinter’s words remain those of white supremacy, with an attempted leavening by Clintonista parsing. It is that, and his sliding around on it which convinced me, not anything by Johnson.

To me that is the Schwerpunkt of this. I have heard NO effective refutation, nor has there even been much of any attempt.

No taint of white supremacy, NOMATTER the perceived situation can be allowed to destroy what is, to all the people I know, a bunch of nuts like us to begin with.

It is tough enough. Allies such as that make it HARDER not better.

I am NO newcomer.

Apparently it has somehow become my task to get Filip Dewinter, a respected leader in a prominent European political party, to “see the error of his ways,” and to “repudiate such ideas”.

The word “presumption” doesn’t even begin to cover such breathtaking prescriptions.

Anybody else want to go to Flanders and convince Filip Dewinter of the error of his ways? Mind if I watch while he laughs in your face?

But seriously — it’s ludicrous in the extreme to demand that a seasoned politician with a proven track record of serving the voters in his country justify his actions to me or any other American blogger.

For what it’s worth, this was my response to Epaminondas:

Actually, I had a long talk on this very topic with Filip Dewinter when I was in Flanders last month. I was wearing the Danish-and-Israeli-flags pin that Anders Gravers had given me in Copenhagen last April. I showed it to him and suggested that Vlaams Belang might want to do something similar, in order to help dispel the notion that VB is an anti-Semitic or neo-Nazi party.

He said, “Oh, yes, we already have those. I can show you.” He explained about the strong support that he receives from the Orthodox community in Antwerp, and the fact that the Chief Rabbi of a rabbi in Antwerp is one of his advisors.

Now, you can say that this is irrelevant, that these Antwerp Jews are like the Jews that support Ahmadinejad, and that their support means nothing, even though there are many more of them who support Vlaams Belang than would ever support Mad Jad.

But consider these three facts together:

Doesn’t that mitigate against there being any current anti-Semitism in the policies of Vlaams Belang?

I can’t see into Filip Dewinter’s heart. Perhaps he hates Jews, but finds it expedient to court them. Perhaps he used to feel differently in his youth, but has outgrown such a position, just as Robert Byrd has with respect to the KKK.

Or perhaps he has never felt any antipathy to the Jews.

In any case, I take Christ’s words to heart: “By their fruits ye shall know them.”

By their fruits, Filip Dewinter and Vlaams Belang are not anti-Semitic.

As for the demand that he repudiate his alleged past: why is the above not a sufficient repudiation? Why would he need to grovel before certain Americans who know virtually nothing about him or Flanders?

This is the quintessence of arrogance. Filip Dewinter is not going to repudiate anything based on our demands. He is not aware of our demands, and would consider them impertinent and irrelevant to his cause if he were aware of them.

Why would he need to dance to our tune in the first place? What good would it do him to abase himself before the American gods of PC?

O, Faustus, leave these frivolous demands,
Which strike a terror to my fainting soul!

Update: The discussion in the comments has led me to expand on what I said above.

Two things are at issue here, content and process. Many people, in the heat of the argument, mix up the content and the process. I’ll tackle them separately.

The two parts of the process that I take issue with are these:

1. That a political movement must be pure, without stain, absolutely clear of any taint whatsoever of association with people and groups that are deemed beyond the pale.

This is absurd and counterproductive. Adhering to this kind of Manichean purity serves only to guarantee that no political action whatsoever can be achieved. No party has ever been successful without compromising and allying with groups that are at least somewhat distasteful. To aspire to this kind of whiter-than-white (sorry; infelicitous metaphor) cleanliness is to guarantee our failure and the victory of our enemies.

2. That American bloggers or opinion journalists can demand that a Flemish politician explain each and every tidbit of his history.

This is hubris of the highest order. To expect that Mr. Dewinter adhere to our standards, or even explain himself to us, is ridiculous.

Also, once again, it puts forward a Platonic ideal that is unattainable this side of the grave.

In the quest for absolute ideological purity, self-righteous critics of Vlaams Belang are overlooking its very real accomplishments, which we should be applauding and supporting. Nothing that the party has done since the beginning of this millennium reflects badly on them.

Why don’t these facts matter more than that cross?

I’ll repeat what I wrote in the comments:

I honestly don’t know the answer [to what the Celtic Cross means to Filip Dewinter] — if I did I would post it — but given the time and the milieu in which Mr. Dewinter lived, and the nature of Flemish politics, a sympathy and/or association with “white power” groups would not be at all surprising.

The same can be said of other groups all across Europe. The reigning socialist orthodoxy has forced patriots and people who are proud of their culture into the same bed as the white power freaks. Once forced by the elites into that smelly little ghetto, all patriotic expression can be condemned as “neo-Nazism”.

That’s why I want to draw the discussion away from what Filip Dewinter feels to what he does. The behavior of Vlaams Belang is manifestly something we all should support — pro-Israel, pro-free market, in favor of smaller government, etc. And all the while they endure the taunts of the real neo-Nazis for being Jew-lovers.

Why doesn’t all that count?

I still say: by their fruits ye shall know them

I know the man’s name, but I haven’t yet received permission to post it.