From Dagens Nyheter, as translated by Paul at Swenglish Rantings:

Iraqi fisherman caught a shark in his net 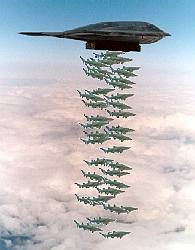 A two meter long shark got caught in a net last week that a fisherman cast out into the river Euphrates. Now, the local population is nervous that there might be more sharks in the river, according to Reuters.

“I recognized the fish as a shark since I have seen one on TV”, the fisherman, Karim Hassan Thamir says to Reuters.

The shark was pulled out of the river Euphrates near an irrigation canal, not far from Basra in southern Iraq and about 124 miles/200 km from the sea. According to Dr. Mohamed Ajah at Thi Qar University in Nassiriya sharks usually do not get that far up the river due to the barriers…

“In this case I believe that the shark was there for a long time without anybody discovering it”, says Mohamed Ajah to Reuters.

But many of the local population believe that the American military was behind the shark suddenly turning up. A teacher felt that it probably was a “75-percent chance” that they would have put the shark in the water, and one of the fishermen in the area agrees with him.

Now we know where Donald Rumsfeld is. I always wondered when he’d pop up again.