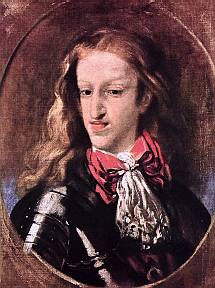 For several centuries an anatomical peculiarity known as the “Habsburg lip” (or the “Habsburg chin”) occurred repeatedly among members of the royal families and aristocracies of Europe. It was a genetic abnormality of the lower jaw, and made normal chewing difficult for those who suffered from it.

The Habsburg lip resulted from generations of inbreeding throughout the royal families of European countries. Within this rarefied society, cousin marriage was the norm, and the accumulated genetic defects led to the frequent expression of recessive genes among the monarchs of Europe. As a result, physical abnormalities, insanity, and idiocy manifested themselves within the aristocratic breeding stock.

Another famous example was Queen Victoria of Great Britain, who, through her numerous progeny and their descendents, contributed hemophilia to the list of ailments bequeathed to Europe’s ruling families. Inbreeding was simply the order of the day; Queen Elizabeth and Prince Philip are both great-great grandchildren of Queen Victoria.

The harmful effects of inbreeding reached their dubious climax in Charles II, the 17th-century Habsburg king of Spain. Not only did Charles have the Habsburg lip, but he was also mentally and physically disabled. More importantly for the politics of the day, he was unable to sire children. The Habsburg line in Spain ended with him, sparking the War of the Spanish Succession.

From a systems-analysis standpoint, the gene pool of the European monarchs was a small closed system, with no mechanism for correction should the information within the system become corrupted. In a modern computer system, the solution would be multiple-redundant offsite backups with a disaster recovery plan in place to cover emergencies in the event the system should be compromised.

Such an approach was not available to the collective royal DNA of Europe. The obvious solution was outbreeding, but that was simply unthinkable. Resorting to it might — horror of horrors! — contaminate the line with common blood. That was just what was needed, but the system did not allow for it. As a result it carried the self-limiting seeds of its own destruction.

The analogy with inbreeding can be extended to include other types of human information systems. Cultures, polities, corporations, and any other collectives of homo sapiens can be damaged by the informational equivalent of inbreeding.

In constructing a system, the trick is to keep it open enough so that it retains flexibility and responsiveness, while retaining a rule-based structure to avoid any descent into chaos. In classical capitalism, the “invisible hand” of the marketplace serves to keep the system open and functioning at maximum efficiency, but only as long as the rules constrain it. The enforcement of contracts, protection from theft and extortion, guards against monopoly, etc., are necessary preconditions before the invisible hand can work its magic.

When it does, millions of people can make their own uncoerced self-interested decisions. Information flows rapidly and effectively through the system, and the power of the market is unleashed.

To find its economic opposite we have only to look at the Soviet Union, a system that was so closed and encumbered with destructive rules that it failed to survive even for a century.
– – – – – – – – –
Obviously, political systems are subject to the same kind of rules. For a constitutional republic to be successful, it must be rule-based but open. It needs a well-constructed constitution, the rule of law, and a well-defined system for changing its laws in order to retain flexibility. The farther a democracy strays from these ideals, the more corrupt and sclerotic it becomes.

All human organizations have a tendency to become rigid and sclerotic with the passage of time. Those who benefit most from the system — the people at the top with all the perks, privileges, and power — understandably want to restrict the flow of information in order to preserve and extend their position.

The worst-case scenario occurs in those dictatorships which consolidate absolute power into the hands of a single person. Preserving his position requires the maximum leader to eliminate his potential rivals, who are also the people most likely to provide valuable information, new insights, and alternative political strategies. His inner circle is eventually reduced to yes-men and toadies who convey nothing to their boss that he doesn’t want to hear. The system becomes totally closed, and once corrupt information enters, it persists and becomes magnified, eventually bringing down the entire structure.

Stalin may be the most extreme example of this process. At the height of his rule, reliable information about the governance of the country not only never reached him, it simply didn’t exist. From the top to the bottom the Soviet Union was riddled with lies, false statistics, cover-ups, and deliberate inventions. This wasn’t a bug in the program; it was a feature — each person in the Bolshevik system had everything to lose and nothing to gain by passing on correct information to other parts of the system.

The Lysenko affair could only have occurred within a closed system as deranged and corrupted as the Soviet Union under Stalin.

The best overview of the theory behind rule-based open systems can be found in The Wisdom of Crowds by James Surowiecki. The author extends the concept of the invisible hand to all large groups in which numerous sources of information are available. Varied, conflicting, and contradictory opinions, when aggregated within a large group, arrive at a much closer approximation of the truth than any individual can manage.

An example can be found in the old fairground contest, in which participants pay a dollar to guess the number of marbles in a large glass jar, with the closest guesser winning a prize.

Someone might make a lucky guess and hit the exact number of marbles in the jar. Others will be close, and still others will be wildly off in their guessing. But studies have shown that the average of all the guesses is invariably accurate. The aggregation of many ordinary opinions gives a better answer than any provided by a single informed expert.

Despite the contempt in which educated people hold the great unwashed, the collective opinion of the masses is more likely to arrive at the truth than the most educated expert.

It’s a bitter pill for us know-it-alls to swallow.

So what does all this have to with blogging the Counterjihad?

Well, it helps explain why we try to keep the discussion here at Gates of Vienna as open and fluid as possible. Our forum is definitely rule-based, in order to keep the system from descending into chaos, but within these constraints we want the information to flow freely. Some of our commenters chafe at our guidelines, but the rules help make sure the wisdom of the crowd is effective here.

Part of this is a personal predilection: I really do like to listen to various points of view before making up my mind. But it’s also a strategic consideration — if useful working ideas are to emerge from our efforts and be utilized, we need to open up the discussion to as many voices as possible.

In dealing with European issues I am at a disadvantage, since my knowledge is so limited. Therefore I try to let people from the countries involved speak for themselves as much as possible. If there are differences among, say, the Dutch, my response is to post as many examples as I can find of opinions within the Netherlands, and let the readers and commenters sort through the results to reach a conclusion.

To let exponents of opposing points of view air their opinions — provided they remain civil and temperate — is one of the main missions of Gates of Vienna. What has worked well so far has been to present the information without a lot of editorializing, and allow the audience decide what makes sense.

Then the distributed intelligence of the internet does its work, and the “best fit” line appears through the scattered data points. Through the wisdom of crowds the truth emerges, and we can all absorb it and move on to whatever the next step might be.

The major mistake of a tightly-controlled forum is to suppress the distributed intelligence of those who voluntarily take part. The arbiters of the forum arrogate all the intelligence unto themselves, which of necessity makes for a lower IQ than the wisdom of crowds.

By controlling content, they effectively cull the herd within their forum, selecting for genetic material that most closely matches their own. It’s no surprise when all that inbreeding results in intellectual hemophilia and idiocy.

Which brings me to one of the reasons I happily endure the slings and arrows and brickbats of Gringo Malo and Jesus Christ Supercop: as long as they’re around, I know I don’t inhabit an echo chamber.

28 thoughts on “How to Avoid Intellectual Hemophilia”