According to The Daily Mail, a British Labour think tank is recommending that Christmas be “downgraded.”

Downgraded? Is this a security alert? Are we going from “High”to “Elevated”? Is someone setting Christmas trees on fire?

Labour’s favourite think-tank says that because it would be hard to “expunge” Christmas from the national calendar, ‘even-handedness’ means public organisations must start giving other religions equal footing.

In other words, people can’t be left to themselves to celebrate their own holidays? Evidently government is ready to reach its bloated fingers into ever widening areas of interference: 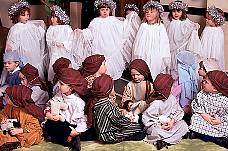 “If we are going to continue as a nation to mark Christmas — and it would be very hard to expunge it from our national life even if we wanted to — then public organisations should mark other religious festivals too.

“We can no longer define ourselves as a Christian nation, nor an especially religious one in any sense.

“The empire is gone, church attendance is at historically low levels, and the Second World War is inexorably slipping from memory.”

The report, written by IPPR advisers Ben Rogers and Rick Muir, calls on Ministers to launch an “urgent and upfront campaign” promoting a “multicultural understanding of Britishness”.

“Multiculturalism can be shown to provide for a fairer and more liberal society and does not necessarily lead to social division and community conflict, as its critics have claimed.”

Fortunately not everyone agrees with these dim bulbs:

Sayeeda Warsi, the Conservative spokesman on community cohesion, said: “Their comments betray a breathtaking misunderstanding of what it is to be British. These proposals could actually damage cohesion.”

She added: “You don’t build community cohesion by throwing out our history and denying the fundamental contribution Christianity has played and does play to our nation.

“As a British Muslim I can see that — so why others can’t just staggers me.”

And she attacked ceremonies to mark the registration of a baby.

“The thought of Gordon Brown sharing responsibility with me for bringing up my children sends a shiver down my spine. I thought we got rid of communism?”

Such blatantly Orwellian “solutions” are stupefying. What do these people do — stay awake at night and memorize “Animal Farm” and “1984”?

I agree with Ms. Warsi: who wants to be in “partnership” with a bureaucracy when it comes to raising one’s children? I thought that went out with the collapse of the collectivist thinking of the USSR. Obviously, such philosophies don’t actually wither, they simply move to new quarters, put on a different set of clothing, change their accent, and start over. Still the same old indoctrination, though.

As for “ensuring access” to the country-side, I can tell you from experience that American minority young people (and their white confreres) can’t wait to get out of the sticks and move to places where there are jobs and housing — housing besides your childhood bedroom, anyway.

A few kids manage to find work in rural areas, but the whole point of the “countryside” is that it is sparsely populated. From that it follows there isn’t much housing and few jobs. What, precisely, is the supposed attraction?

Why on God’s green earth would “minorities” want “access” to the boondocks? Has any “minority” complained about this supposed lack, or is the — heh — “think” tank just dreaming up items to justify their existence expenses?

And what are these people drinking?

Why the proposal to throw the Bishops out of the House of Lords? Are they being rowdy? Did Parliament rescind the law about the Church of England? Heck, why not a few imams and Hindus added to the mix instead? I think His Lordship, Sir Mohammed Abu Al-Tahid, has a certain ring to it…oh, right: the Episcopal ring would have to go with the job. Maybe a simple star or crescent tastefully done in rubies…

As for ending “sectarian” religious education, that’s not a problem… as long as they also end secular humanist environmentalist religion in schools, too. Fair is fair. One ought to be able to choose the form of indoctrination one’s child is going to undergo. Or is that the states’ role in parenting??

Flags besides the Union Jack, eh? How about pirate flags? Or cute little bunnies on a field of green? Or maybe one’s favorite football team rampant on something-or-other?

This whole thing is balderdash.

But the crowning stupidity is the suggestion (or is it going to be an order from Labour?) that Christmas be shushed so as not to offend anyone.

Just go over to The Daily Mail’s website and see the comments. Readers are a bit bent out of shape about these proposals, but particularly about Christmas.