James D. Miller, the economics professor, has a capital idea: bloggers could cross the picket lines and become union strike breakers in the current Writers Guild of America’s walk-out:

Though this strike affects all 12,000 screenwriters and TV writers in the Writers Guild of America, the television industry will be hit first and immediately.

Thanks to the Los Angeles Times, here’s a breakdown of how some of our favorite shows will be impacted. And it isn’t going to be pretty.

“The Tonight Show with Jay Leno,” “The Conan O’Brien Show” and “Jimmy Kimmel Live” will go into repeats immediately because those daily shows are staffed with WGA writers. Also add “Late Night with David Letterman” to that mix.

“The Daily Show with Jon Stewart” and “The Colbert Report” also will go into reruns immediately because their scripts are written daily due to their topicality. (Now this strike is starting to hurt.)

Also, variety shows like “Saturday Night Live” will go into reruns immediately since they depend on topical comedy as well.

I can think of a few funny guys who could cover some of the bases in this game until the strike is over.

For one, there’s Fuggettaboutit. He could stand in for “Saturday Night Live” writers all by himself. Here’s his take on exercise, the non-value of (consider how this would look as a skit):

Seriously, what does good health really buy you once you hit 50 years old?

What if that extra five years is during Hillary Clinton’s time as President? Do I want to spend the last five years of my life listening to someone that always sounds like a pissed off ex-wife?

What if you diet and exercise to get that extra five years and then get run over by an illegal alien who doesn’t have any auto insurance? 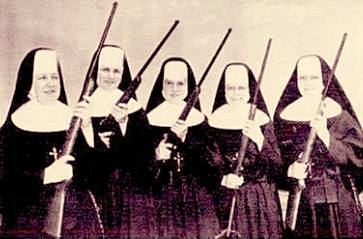 This is an Italian after my own heart. He also has a feature on Café Press called wopwear. One of his items is that great picture of the nuns with rifles. However…
– – – – – – – – –
I don’t know that I agree this is, strictly speaking, wop wear. Those look like Irish nuns to me; truth in advertising would suggest that he name it mickwear.

Are We Lumberjacks? could do a bang-up job for Jon Stewart. An added plus would be the fact that his political jokes would come from the other side of the aisle, sending the progressives in paroxysms of fury. They might end up too disabled to vote, thus earning Lumberjack a Presidential Medal…of some sort.

“You Had Me at Idiot” already possesses the credentials for strike-breaking the Writers’ Guild. He has a book out – thus proving he’s a writer – and he has a fine idea for catching crooks while they’re still young enough not to have done too much harm. Check out this smooth operation. This guy is so politically incorrect he’ll have to go into hiding when Miz Hillary declares martial law wins the presidency…and then declares martial law.

Or how about Scrapple Face (“News Fairly Unbalanced. We Report. You Decipher”), the dean of them all. He even has a solution for this strike by the Writers’ Guild:

In perhaps the most Reagan-esque moment of his presidency, George Bush today responded to the declaration of a strike by 12,000 Hollywood writers by ordering late-night comedy writers back to work within 48 hours.

In a brief Oval Office statement, Mr. Bush said, “If I have to replace every writer for The Daily Show, Stephen Colbert, Johnny Carson and whatever else is on TV after my bedtime, I will do it. I’m the decider. I’m personally responsible to make sure that Americans have something to laugh at every night.”

The president expressed reluctance to nationalize the Writers Guild of America, but said he has placed the Federal Emergency Management Agency (FEMA) on standby in case the guild members defy his order. He would also ask California Gov. Arnold Schwarzenegger to deploy the state’s National Guard units to maintain order during a professional joke blackout, ensuring that citizens “don’t take humor into their own hands.”

While daily comedy shows would be first affected and hardest hit by the strike, the president said he’s taking such firm and rapid action because the work-stoppage will eventually slow Hollywood’s production of “films that set the moral tone for our nation, and establish America’s reputation overseas.”

“Let no one question our resolve in this matter,” said Mr. Bush. “I sincerely hope the union doesn’t misunderestimate the values I place on professional writing.”

Maybe Scrapple Face could just be declared President of the Strike Breakers and then he could make all the necessary appointments for the programs affected.

I suggest Fred Thompson as a fill in for the writers behind “Law & Order: Criminal Intent” – think of the exposure it would give him for his campaign. I know he’s not a blogger, but we could make an exception here for previous experience.

All of y’all with TVs, who actually know some of these shows could probably make better suggestions than I have here. Be my guest…I’m always on the lookout for humorous blogs.

Now if I could just think of a use for Lolcats. Besides Bible reading writing, anyway. Calling their deity “Ceiling Cat” is truly inspired. Such talent deserves prime time exposure, hai?. Here’s the beginning fo the Beginning, all done because Ceiling Cat is bored:

Oh hai. In teh beginnin Ceiling Cat maded teh skiez An da Urfs, but he did not eated dem.

2 Da Urfs no had shapez An haded dark face, An Ceiling Cat rode invisible bike over teh waterz.

15 thoughts on “A Striking Opportunity”